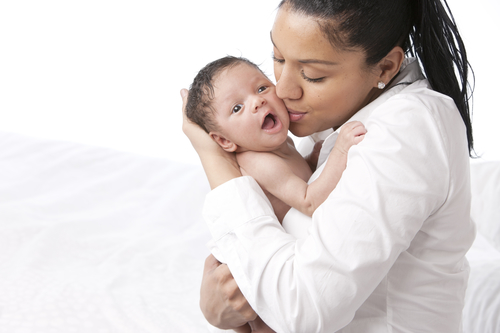 Lou helps navigate between unwanted advice and receiving support of the kind, comforting and humorous variety.

When you have gone through pregnancy, child birth and then the few short years that follow it’s easy to fall into the trap of thinking of yourself as an expert.

It can start innocently enough. A friend, newer to the motherhood schtick than you are, bemoans something that they’ve recently been going through and asks for your opinion. You open your mouth to try and guide them through like the gentle, zen-like creature you have become when suddenly Oprah emerges from your gaping mouth and you start dishing out the condescending, unnecessary advice like you’re handing out free cars.

You’re telling your friends they need to put soft things behind their babies in case they fall over. You’re letting your cousin know that you can check if your baby needs a nappy change by smelling him first. You’re telling a random frazzled woman in front of the peas as Coles that her toddler is probably whining because she’s hungry or tired. You have become the officially designated No-Shit-Sherlock without even meaning to and you have no idea how to stop.

There’s a big difference between being a listening ear when someone needs support or to just vent to and being the holier-than-thou know-it-all who so often stalks the comment section on Facebook, looking for a way to assert their position in the mummy-hierarchy. While it goes without saying that someone newer to this gig than you probably doesn’t possess the same level of experience, a lot of the time it’s better to let people find things out for themselves. Having worked in an industry full of people shorter and younger than me for quite a long time now I can tell you that the joy and accomplishment of learning, the satisfaction that comes when you have taken on a task and pushed yourself to succeed, is an experience that you don’t want taken away from you.

Sure, it can make life easier for people to keep telling them what to do all the time, but is it necessary? Try asking yourself the following questions if you find yourself in a position to give anyone parenting advice.

Please disregard the fact that you’re reading a column on parenting advice; I don’t like it when my hypocrisy is pointed out to me, it makes me uncomfortable.

I follow quite a few Insta-mummies and I’ve noticed that by nature of doing their mothering in a public way they seem to attract a lot of comments of the “I told you so” variety. One in particular posted a while ago about how her son, nearly two, was fighting his naps all day only to fall asleep briefly on the couch at around 4:30pm and then be awake partying all night. Beyond flashing lights in the kid’s face and shouting at him through a megaphone there was NOTHING she was able to do to stop this. Her post was a desperate whinge into the void where she just wanted to say ‘Argh, we’ve tried everything, this sucks’. Simple enough, right?

Not so for Instagram! She copped everything from nap time suggestions to sleep school recommendations. Criticism over not being able to keep her child locked onto a schedule. Really basic suggestions like “Have you made his bedroom dark?” like she hadn’t thought of that a million years ago. This poor woman merely wanted to vent like you would to a few mates over a cheeky cider but instead the mummy-police saw an opportunity to let her know, through well-meaning and nicely chosen words, exactly how she was lacking in basic parenting skills.

Did she need to know all that shit? No! Does she have a right to talk about how sometimes things are just hard? Yes! Is it necessary to suggest things to her that she’s probably already done? No! Do you look like a pompous arsehole when you do that anyway?

2. Have I considered that not every child is like mine?

I’ve talked about it before but my kid used to be a really, really good sleeper. When we lived in Melbourne he would sleep all through the night, every night and he’d take a bare minimum two and a half hour nap every day.

When we moved north, instead of adopting a casual chilled out approach like the rest of the family did he decided to get himself wet, eat after midnight and turn into a Gremlin with a taste for late night snacks and partying. I could count on one hand the amount of uninterrupted nights we’ve had in the past nine months and on the rare occasions we are not woken up by him singing about how “Mummy did a fart” at 2am we both wake up in a panic assuming something must be horribly wrong.

I knew I was onto a good thing with my super-sleeper when we were down south, though, so I tried really hard to not talk about our situation when friends of mine moaned about their own little sleep-thieves. Because I knew, even without having experienced life from the other side yet, that not every kid is like mine and that other parents DON’T need to hear you say, “Oh, wow, Henry VIII has always been such a fantastic sleeper, it must be something you’re doing wrong”. Like, come on. How is that helpful? Nowadays when I hear people say things like that I secretly wish that their soundly sleeping angels turn into teenagers who are allergic to curfews. Mama-karma.

3. Am I saying this from a place of kindness or just to make myself look better?

In a world of Instagram filters and hashtags (#blessed #wifelife #toooldtohashtag) we’re up against some pretty fierce narcissists. From the clean-eating crew to the cross-fit crazies it seems like everyone is out to show everyone else how amazing and perfect and OMG AMAZING they are.

Is the constant ‘advice’ giving a part of that? When we say “We only wash our children with the most expensive baby shampoo made from the tears of Monks in Peru” are we trying to help or are we subtly (or not-so-subtly) letting people know just how on top of this parenting shit we truly are? Can we help other people without prefacing that help with a little mic-drop about our own awesomeness or have we become purely focused on self-promotion at all costs?

Do I have all the answers to parenting? No, of course not, I’m basically an adult baby. But what I do know how to do is to comfort people when they need it, make people laugh when they need that too and help create spaces where we’re allowed to say that we have no fucking idea what we’re doing but we love our kids so we’re trying out best.