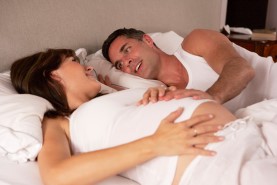 Bit of an awkward question, but does anyone have any tips for boosting sex drive while pregnant? I’m pregnant with number 3 & my sex drive is at 10 below zero, lol. It’s really upsetting for my husband, resulting in being upsetting for me as well. He thinks I don’t find him attractive, but its not that at all, I just do NOT want sex, or even really to be touched at all, lol. We’re open and talk about it plenty, and it does happen every so often, but I don’t really enjoy it, i just want it to be over so I can sleep LOL (poor husband)… sorry for tmi

Looking After You & Baby in Pregnancy
Pregnancy Relationships Sex drive