Amy from The Thoughtful Parent shares her insights on the “difficult baby” – the research results are surprising.

Are you the parent whose baby seems to cry more than the other babies in your group of friends? Is your baby the one that is still not sleeping through the night when seemingly all other babies her age are already doing so? Does your baby seem overly sensitive to noise, crowds or bright lights?

If you’ve ever been that parent, you know that it feels overwhelming at times. You may feel there must be something wrong with your baby or your parenting skills if you child reacts so differently than other children. You may feel embarrassed by stares of others when your baby is crying again as you walk through a store or dine at a restaurant. Deep down you may feel stressed by the constant attention your child requires.

If this sounds familiar, this article should be a source of hope. More and more research is showing that temperamentally sensitive babies are not destined to have a difficult temperament in the long-term. In fact, these sensitive babies can transform into well-adapted, social toddlers with your help.

What the research is telling us about the difficult baby

A recent study from the University of Maryland further reiterates this idea. Researchers followed 84 infants from birth to age 2. They rated babies on their level of irritability. This was based on how they reacted to stimuli such as hearing a bell ringing or being undressed. At one year of age, the attachment style of the babies was measured using the classic attachment rating process.

Interestingly, for toddlers who were only moderately irritable as infants, the quality of attachment with their mothers had little influence on their sociability or willingness to engage with the new environment

So basically what this study tells us is that children who are highly irritable or “difficult” as infants are more vulnerable to the role of parental influence. If parents are responsive to them they have as much (or perhaps greater) likelihood to grow into sociable, engaged toddlers. However, these “difficult” babies are also more vulnerable to a lack of parent responsiveness and if this need is not met they are also more likely to be withdrawn or less sociable as toddlers.

This topic is so important because at times I think parents consider their child’s temperament as something permanent or something that they have little influence over. Based on the research that’s coming out, it’s looking like temperament is more like a moderating factor, that in some ways may affect how susceptible a child is to the outside environment, including parenting actions.

Another study looked at a similar process, but followed children for even longer—from birth to first grade. The researchers wanted to look at how babies with different temperaments (e.g., difficult, easy) ended up doing socially and academically by the time they reached first grade and what, if any, role parenting played in this process. Previously, some people had thought that a baby with a difficult temperament would have more difficulty adjusting to school later in life.

The findings were very enlightening: children who were labeled as having a difficult temperament as infants had as good as or better grades and social skills in first grade as children not labeled as difficult if their mothers provided good parenting. In other words, parenting matters! This is probably not a huge surprise to many people, but it’s interesting to see the research to back it up. Not surprisingly, children with difficult temperaments who received less-than-optimal parenting fared worse in first grade than other children.

I think a lot about this topic because I worry about all the babies out there who are considered “difficult” or have an irritable temperament. They often put more of a strain on parents–they require hours of holding, rocking, and soothing and as a parent you may wonder if you can keep it up. I worry that many parents or caregivers will simply think the child has a “bad” temperament and not see the positive characteristics the baby or child has to offer.

Where to from here … difficult baby to a well-adjusted child

After reading the research, I have begun to see babies labeled as having a “difficult” temperament as having great promise for being well-adjusted, social children. These babies seem to be the most sensitive to parents’ behavior and reactions, even more so than “easy” babies. Thus, while these babies may require more effort and attention, the amount of influence parents and caregivers have on these babies is also greater. There is something lovely in thinking about an irritable/fussy baby who turns into an outgoing, sociable toddler and this can be in large part due to attentive, responsive parents.

So if you are a parent of an irritable infant, take heart! All the effort you are putting forth for your child really is worth it (as if you had any doubt). In a year or so, you may begin to see an adventurous, engaging toddler emerge in your midst.

Amy Webb, PhD is a scholar turned stay-at-home mom with two young sons. With her blog, The Thoughtful Parent, she brings academic child development and parenting research into the lives of parents in the trenches of child-rearing. She does not claim to be a parenting expert, but rather a translator of academic research into reader-friendly articles. 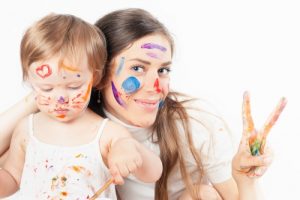 Quit parenting … I did 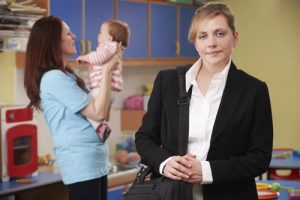