Ease up, Judgey McJudgerson. It’s only Mummy Wars if you buy into it. 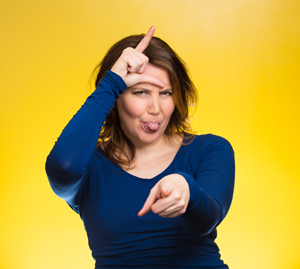 If you’re reading this, chances are you’ve already absorbed an absolute plethora of information about all aspects of motherhood. Baby wearing. Co sleeping. Breast vs bottle. Cloth nappies. Baby led weaning. Making your own baby food. Sleeping. Not sleeping. Poo in all colours of the rainbow. If these laws concerning monitoring what sites we look at on the internet actually come into play I may be getting a knock on the door from a government agency in regards to some of my more bizarre Google search strings. Poo + yelling + dog lick + yoghurt, anyone?

One thing that I’ve noticed quite a lot of, be it in online forums or when you’re in the company of other mothers, is the judgement. The pooh-poohing. The looking down the nose. The ‘siffing’. (Imagine you’re sitting next to someone in the movies who keeps scoffing at everything and saying “Oh, as if”. That’s siffing.)

I’ve been judged a lot in my life. I’ve made some really shit choices about a lot of things. I’ve made some really great choices about a lot more other things. I used to really beat myself up for things I’d stuffed up in the past, but in the last few years, particularly since becoming a mother and being in an amazing relationship, I’ve gone a lot easier on my past self. She was young, she had a lot of weird shit going on in her head, she was under a lot of pressure, she was in some really difficult situations. With all of this in mind, I’ve taken it upon myself to avoid judging others where possible. We all know very little about each other’s back stories and the secret horrors that people may be going through each day. You need to be cool to each other.

With all of that in mind, I’ve written a short guide on how to avoid the judgemental pitfalls that will label you one of life’s assholes, and instead focus on coolness. Most of you are probably well aware of these steps and could think of more of your own, but you’re probably far more socially adept than I am. Good for you. Quit judging me.

1. If you want people to let you be yourself, you’ve got to accept that in others.

Accept that you are weird now. You live in baby land – you make up songs about everything, you act out your daily routine in wild gestures, you are either always very loud and engaging or very quiet, and you smell of desperation and milk. Push these aspects of your personality right down and take a pause before eagerly jumping in to any conversation.

Case in point – when the group at Gymbaroo was discussing the royal family, I happily bounced in with ‘Hey, remember when Prince Charles told Camilla that he wanted to be her tampon?’ After the group gave this the considered pause that it was due, there was laughter. I excitedly took this as approval and started to give my impression of a tampon with a British accent. While they (rightfully so) probably left the exchange being more convinced of my idiocy than they were before; for one brief moment in the sun, I was allowed to shine. Shine bright like a tampon.

2. Do not offer unnecessary or unasked for advice.

You know what’s nice? Commiseration and empathy. “Little Bastille (I live in a weird area) not sleeping still? Oh that sucks. Would you like one of my Golden Roughs?” Appropriate. “Oh, is Edvard Von Crumperling starting to sit up? Make sure you put soft things behind him in case he falls.”

Really? REALLY? IN CASE HE FALLS? A SOFT THING? REALLY?

While you probably think this is helpful, the other person interprets it as you letting them know that you think the most basic aspects of parenthood (ie. Don’t let your kid crack his skull open) are completely beyond them. It’s insulting and poor form. It also opens yourself up to criticism lest you stray from your all-knowing impeccable path.

Don’t do this, it makes you an asshole.

3. Do not make concrete plans if you’re not in a great place to keep them.

I know what you’re going through. You just tearily walked past a group of mothers looking like something out of the ‘We’re Better Than You’ catalogue, having their bloody blueberry friands while their babies are napping like idiots in their super expensive prams.

Forget those jerks. They’ve had just as many bad days as you have. You’ve just happened to pass them when they’re having a good one.

If it’s a bad week, tell your friends, “I don’t know if I can go out to lunch this week. November Rain has been teething and I haven’t slept in days and my husband will not stop farting and I am just at the end of my rope”. If they’re cool, they’ll come round with a meat pie and pat your head while you cry into it. If they suck, you know where they get their friands. If you keep making plans and keep cancelling them on the day of, however, people are eventually going to be reluctant to ask you to hang out with them again. Try to be honest and try to be realistic about what you and your little dude are capable of.

By the same token, accept that you’ll get ditched just as often. Be cool with it. They don’t mean to ditch you so stop refreshing their Facebook page being a weird stalker.

I admit that I quit my mothers’ group. Shockingly, it wasn’t because I know everything or because I didn’t need or want support (I really, really did). It’s that what the women were offering me wasn’t support. It was some kind of bizarre one-up-mum-ship that I wasn’t into.

Smugness isn’t excitedly talking about what your kid has achieved lately. Smugness is phrasing these accomplishments in a way that makes other people feel like crap.

For example. “Hunchback of Notre Dame finally managed to sleep most of the night. We are so super stoked. I managed to not scream at my husband for abandoning me before he went to work this morning.” Cool. Relatable. I’m not imagining stuffing a nappy bag down your throat. Compare this to – “The Dark Knight simply puts himself down at 7pm and then gently rouses 12 hours later. Maybe your child isn’t sleeping through because you’re doing everything wrong. Have you tried (insert incredibly obvious solution that you have obviously tried here)?”

See the difference? I do. That’s why I quit those ladies. You should quit anyone who says that shit to you, it’s poison.

5. Help and be supportive wherever possible.

This is the old ‘treat others how you would like to be treated,’ bit but don’t roll your eyes because this is the realness. Is that comment you are writing on Facebook under a mother’s desperate question helpful or will it make her feel worse about herself? Is your opinion on breast vs formula absolutely necessary on a question about which bottles to buy? Look for small ways and means that you can be kind. I mainly use Facebook to make myself laugh but becoming a regular commenter on the Babyhintsandtips page has taught me a few lessons in empathy that I don’t think I had my head around before.

In the immortal words of Bill and Ted, “Be Excellent To Each Other”. And remember, when in doubt, talk about tampons.

When have you felt judged by a Judgey McJudgerson?

Lou Kenny is a 31 year old first time mother. She lives in Melbourne with her darling baby, long-suffering partner and two needy, ridiculous dogs. To see all of Lou’s articles, click here.