Flu facts – what does your GP have to say? 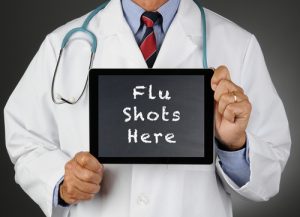 What is the flu?

The “flu” is caused by the Influenza virus and is characterised by high temperature, cold-like symptoms (runny nose, cough, sore throat), muscle aches and pains, headaches and sometimes nausea, vomiting or diarrhoea. It tends to make even very healthy people quite unwell, usually for about a week. Many people who have colds say they have “the flu” but often this is not the case, particularly in the absence of high temperatures. Those who have truly had the flu will usually never call their cold “the flu” again!

What are the complications of the flu?

Possible complications of the flu include pneumonia, myocarditis (inflammation of the heart), encephalitis (inflammation of the brain) and death. What is quite scary is that young, previously healthy people can suffer from these serious complications (although those with underlying medical conditions, the elderly, pregnant women and the very young are at highest risk).

How common is the flu?

The “attack” rate in the community is usually around 5-10% of the population, but in particularly bad seasons can be around 20%.  This rate is more like 10-40% for children.  Transmission is more likely in close contact environments (e.g. daycare, school).

How can it be prevented?

Apart from vaccination, the most important way to prevent the flu is hygiene. This means regular hand washing, covering your mouth when coughing or sneezing and not sharing things like water bottles. It is also important to try and stay home if you think you have the flu so as to not spread it to others.

How is the flu treated?

Because it is a virus, antibiotics do NOT treat the flu. Some people may develop a “secondary bacterial infection” (e.g. like pneumonia or an ear infection) in conjunction with the flu and in this case antibiotics may be required.  Generally no specific treatment is used: rest, maintaining fluids and treatment of discomfort with paracetamol is recommended. There is an anti-viral called Tamiflu which can be used if it can be started early in the illness. However, for various reasons it is not used widely in the general population – it is expensive, has side effects (people often stop taking it due to side effects) and likely only slightly shortens the duration of the illness.

Who should have the flu vaccine?

The Australian Immunisation Handbook recommends that “every person over 6 months who wishes to avoid influenza” should have the vaccine. However, the vaccine is funded by the Government for certain high risk groups only. In children these high-risk groups (who will receive a free vaccine) are those with:

It is also funded for anyone with an Aboriginal or Torres Strait Islander background. Check your state health department website for other eligible groups. Even if unfunded, the vaccination is relatively cheap, available for well under $20.

What vaccines are available and are there any differences between them?

This year there is a “quadrivalent” vaccine out which covers four strains of influenza rather than the previous (and still available) “trivalent” vaccination. This gives a broader cover against the extra strain likely to be circulating this year so I would recommend having this one if it is available.  There are specific brands that are safe for children (your vaccine provider will know this).

What are the side effects of the vaccine?

The most common side effects are mild redness and discomfort at the injection site. Some people get muscle ache, fever or just feel a little “off” for a day or two. The rate of fever is less than 10%. In children, fever can lead to febrile convulsion but this is uncommon (less than 1/1000). They are scary but not life threatening or dangerous in the long term. Very rare complications such as anaphylaxis can occur (usually immediately) which is why you are usually asked to wait at the doctors after immunisation

Does the vaccine cause the flu?

The flu vaccine CANNOT cause influenza. It is not a live vaccine so there is no way it can “replicate” and cause the flu. There are a few explanations for why people get “the flu” after their immunisation. One is that they have another of the hundreds of other flu-like viruses/colds that they are not protected from. Alternatively they may have contracted the flu just before/around the time of immunisation and it takes about two weeks for full immunity to kick in post vaccine. It is also possible given the ability of the influenza virus to mutate that people may contract a strain not covered by the current vaccine. Additionally, not every vaccine is 100%, so certainly some people can end up with influenza after being immunised – these people do tend to have a milder illness.

Is it safe for children?

Children over six months can safely be immunised against the flu (certain brands are registered for use in children – your doctor should be able to advise on the appropriate brand). Children under nine years need two immunisations a month apart the first time they receive it. Subsequent years they will then only need one immunisation. Most other people with normal immune systems only require one dose. Remember that the flu virus mutates and changes every year so each year a new immunisation in required – they tend to be tailored (as best possible) to the circulating strains of flu that year.

There is still some fear associated with the flu vaccine dating back to 2010 when one brand “Fluvax” was associated with very high rates of fever (and subsequent febrile seizures in some children at a rate of about 4.4/1000 vaccines). It is no longer registered for use in children under five (and should be avoided if possible for children aged five to nine). There are other brands available that have been approved for children, without this unacceptably high side effect.

Can it be given with other vaccinations?

How effective is the vaccine?

The vaccine is estimated to be about 60% effective so is by no means 100%. However, this is still a significant reduction in your chance of contracting the flu and those who do have the flu despite immunisation are usually not as unwell.

The influenza vaccine is safe at any stage of pregnancy. In fact, it is actually recommended (and funded nation wide) for women who will be pregnant during the flu season. The reason for this is that pregnant women are one of the groups of people who are at risk of becoming particularly unwell with complications should they contract the flu.

It is also safe in women who are breastfeeding.

As a doctor, I recommend children have the flu shot but leave the decision up to the parents after discussing side effects, effectiveness and evaluating the individual child’s risk. I would highly recommend it for those with underlying medical conditions and I also tend to highly recommend it for those whose kids are in daycare (kids have a higher rate of flu and are likely to spread it due to poor respiratory hygiene) or for those with someone vulnerable at home (for example, a newborn, elderly grandparent, cancer patient).

As a mum, I immunise my (otherwise healthy) 2 year old son and have since he was old enough (no issues last year).  I have seen enough very unwell children (and adults) with the flu to want to try and protect him from this. This year, I particularly wanted to lower the chance of him bringing the flu home to my newborn who is too young to be immunised herself. The vaccines registered for use in children are safe with minimal and generally mild side effects. They are also cheap. In my mind, there was no reason not to do it.