Lessons in being a cool dad

Lessons in being a cool dad? Never say the words ‘cool dad’.

By even mentioning the words ‘cool dad’ I’ve stricken my name off the list for that title, but it’s a thought I had while I was searching through other Fathers blogs looking for ideas to steal. They all seem so funny and charming with some great blogs and articles, but I suppose I have my own talents.

I watch The Simpsons all the time. What started as a bit of joke (needing to be home by 6:00pm so I can watch The Simpsons) actually became something of a ritual. If I leave work on time, hit the right train and don’t get too bogged down in traffic from the station, I usually make it home for that cartoon that’s been running since just after I was born.

There’s one episode quite recently that was specifically about parenting and at my point in life, it actually grabbed me beyond just entertainment.

It was an episode that centered around ‘cool parents’ and started with a trendy young couple with children moving next door to the Simpsons. They were well versed in pop-culture, trendy retro, cloth nappies and natural breast feeding. Obviously everyone has their own life choices and The Simpsons episode built conflict around the two conflicting lifestyles; breast-is-best vs bottle, cultured youth vs letting-kids-be-kids. Homer made some very forward attempts to replicate their lifestyle that ultimately served to highlight the differences between The Simpsons (a family stuck in the very early 90’s) and this far more new-age family.

What did have me looking at myself and my own family was the idea of a ‘cool dad’. Throughout the episode Homer was portrayed as the out-of-touch, boring dad contrasted against the young, trendy dad. The kind of dad who owns his own doughnut van but more importantly, influences a lot of the culture and ideals of his son.

In reality, neither character makes great (or in Homer’s case, even an okay) dad, but the whole idea of a ‘cool dad’ made me think how I will age. Will my son look up to me like I did with my dad or will my son relate to me more? 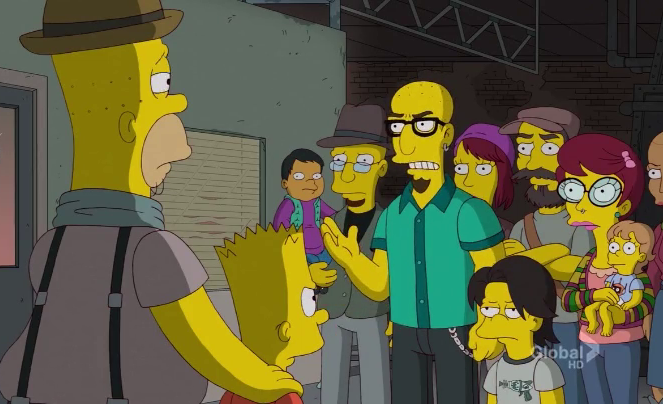 As a child, it was hard to think of my dad as a mere mortal. He seemed impossibly strong and knew everything. To a young boy, being impossibly strong is certainly the coolest attribute a dad can have (“If you don’t give back my toys, my Dad will beat you up”), but I didn’t relate all that well to my own father. He learnt a trade early from his father, travelled interstate and abroad frequently for work and his leisure time usually consisted of watching racing.

Already, my personality is in stark contrast to my father’s. I have a stable 9-5 job in a technology company, I still watch cartoons (like The Simpsons) and if you read my previous article about my mancave/games room, I’m the kind of guy who loves action figures and video games (much to the chagrin of my wife but delight of my son).

My son may be young, but it feels like I’m already hard at work setting up expectations for myself. I want to relate to my son for as long as possible, I want to be a good role-model and I want him to look up to me and trust me. I may be a total dork but my goals of providing for my family and raising healthy, polite children aren’t different to my forefathers. I wonder if they could make that one episode of The Simpsons where they portray a functional, cool father back when the show started in 1989? Is being relatable easier now than it was 20 years ago?

I look at the store toy shelves and I see Transformers, Teenage Mutant Ninja Turtles and Scooby Doo, revised versions of the same toys I had as a kid. Video games especially have had a resurgence of old characters (the Marios and Sonics) and franchises, with most of the games I had as a kid now available as downloadable content. With trends like this, it seems more than ever that the image of the father who is good at Video Games and understands pop-culture is more and more realistic.

As Homer said in the very first season of The Simpsons, “The scariest day of my life was when I realised I could beat my dad at most things, and Bart could do that at the age of 4.” To me, that’s the voice of a parent who has trouble keeping up and staying relevant. I’m just kind of hoping I last a little longer.