Breastfeeding seems to always be a topic that always gets people riled up. Did, didn’t. Tried, didn’t try. Comp fed, formula fed. Weaned… never did! Whatever right!?  At heart we all know that a happy, fed baby is the best baby.

Posting to Reddit, the mum of two shared she was at the park with her husband and their daughter (3) and son (2). “We had been there for 35 minutes, there were probably four other toddlers there with their grown-ups,” she shared.

The family apparently note a boy who is about six years old wondering around the park in a cranky mood. He seemed sort of ‘stroppy and huffy’ she writes.

A quick boob will cheer him up!

The other mother notes his mood and calls him over and then “She sits down on the benches in the middle of the park within eyeline of everyone else at the park and starts to breastfeed him!”

The original poster’s daughter Molly noticed the woman feeding her son, immediately asking her mother what was going on.

“Why has that lady got her booby out?” the three-year-old asked.

The woman responded delicately, uncomfortable, explaining, “I think… she is giving the boy some booby milk”. This prompted further conversation, with Molly asking whether it was like when her aunty nursed her baby son.

You can always rely on kids to be kids (and by this we mean awkward!)

“Molly: Is that like when Jane (sister-in-law) feeds booby milk to baby Harry (cousin)?

Molly: But that boy isn’t a baby. He’s a big boy, like Ruby (older cousin).

Molly: Why would he drink booby milk from a mummy if he is a big boy?

Me: Honestly, I don’t know why.

Molly: It’s a silly thing for big children to do, isn’t it?

Molly: He could have food instead, like broccoli or eggs or jelly”

The mum saw this as an opportunity (praise the lords of mortifying situations!) to quickly change the topic asking Molly if she wanted some food at home. 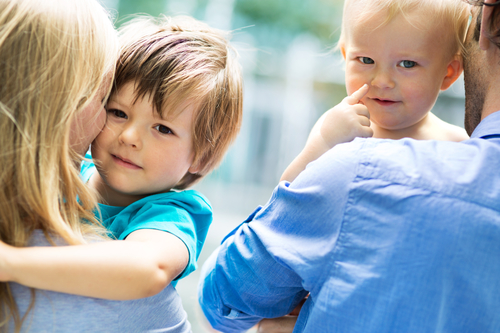 Just when the original poster thinks she’s dodged a truly awkward bullet, her family are leaving and the breastfeeding mum decides to have a word… and she is NOT happy.

She told me she was “disgusted” about how she had “shamed her for naturally feeding her child” and that we needed to teach our daughter that breastfeeding is “the most natural thing in the world”.

“She had obviously heard the uncomfortable conversation I had with my daughter, which I thought I handled well!” the original posting mum added with despair.

Sometimes you can’t do right for doing wrong!

So…. is this breastfeeding shaming?

The group (predictably) went wild with discussion – is this breastfeeding shaming or not?

Other parents commented on the thread, one writing: “You tried to answer your daughter’s questions as best you could and then distract her. The woman was obviously eavesdropping and felt that it was her place to guilt you for not handling it the way she would have.”

What do you think? Did this mum shame another mum for her choice to breastfeed a six year old? Have mums become so defensive they want to fight about anything that doesn’t agree with their way of parenting? If you breastfeed a six year old in a park can you reasonably expect an inquisitive comment or two? Is it no body’s business what you do – public or not?

We can’t decide – tell us what you think below!