Since my Wife started working at a baby store, every day she comes home with stories about the customers she’s helped, often with furniture for the baby room. The baby room goes with the territory of parenthood. Your child will need, well, everything. Cots, bassinets, change-tables, cupboards, shelving, toy-boxes, etc. 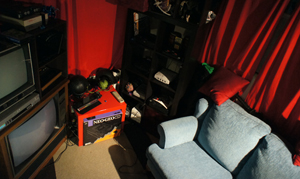 When it comes to making space for it all, it felt like one person was being totally neglected; me. My Son moved into my ‘home office’, we had friends staying in our spare room and with the increasing influx of furniture and gear for both mother and baby, my space was growing increasingly tight. I migrated into the living room where my extra televisions (I have 3), furniture and videogames started immediately annoying my wife. My stuff is ugly. My 56” rear-projection television took up half the living room wall and I had an old, beat-up 3 seater couch with mis-matched cushions (replaced with a blue loveseat).

I know that wanting to claim so much personal space seems unapologetically selfish during a time when I’m supposed to be supporting my family the most. For a lot of friends and family, the ‘man space’ seems to be the first thing to be sacrificed. Some couples try to create a parent retreat but that soon becomes a space totally dictated by female interior-design sensibilities.

My wife let me take over the guest bedroom when it became available, which promptly became my man-cave. It’s where I entertain friends, it’s where I stash stuff my wife doesn’t want to see in the house and, more importantly, it’s a space that I can decorate, furnish and ‘own’. There’s no dishes, laundry or chores to do. When friends come over, it’s a space that’s separate from the house and from the mountains of toys, bikes and everyday mess.

It’s a space where I can try to define myself outside the husband and father roles and where I can reinforce some of my identity before marriage and before children. 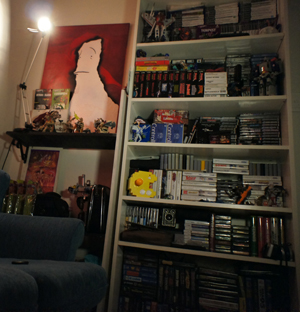 A quick Google search of ‘Man cave’ will bring up an entire Wikipedia article on the topic. The idea of man-cave has become almost pop-culture; a symbol of the new man. I remember my Grandfather telling me about his archery and shooting clubs and it made me wonder, would they have been such a central part of his life if he had a man-cave too? My room means I’m always close to the family, I don’t ‘disappear’ for a few hours but, like my Grandfather who had clubs where he could be himself, I can do that in my own space with or (more often) without friends.

Personally, my man-cave has also had a more productive influence on my life than purely escapism; it doubles as my recording studio. Detached from the house, I can quietly record voiceovers, work on video concepts and produce episodes for my webseries. It might just be a hobby, but it’s not uncommon to see man-caves double as private studies and home offices. A man-cave doesn’t have to be ‘sacrificed’ space, it can become a functional space for entertaining, working and most importantly of all, bonding.

A man-cave might seem a place to escape with a ‘no girls allowed’ policy, but that’s not exactly my nature. I feel truly honored when my Wife and Son want to come into my ‘space’ to enjoy time with me. With my Wife, we might play some games or just sit on the couch and chat but when my Son visits, I’ve got action figures, movie props and filming/photography equipment we play with. I feel that in this space, more than anywhere else, he will truly get a much better idea of who I am outside ‘Daddy’ who leaves five days a week.

The reality is, a man-cave isn’t always going to be practical. The house we’re renting is on the market and if it sells, there’s a chance I might lose my dedicated room. I’m sure there’s a lot of males who have sacrificed their space for the good of their family, and if having an extra room is too much strain on my family budget, I too would be prepared to give it up. What I have made clear to my Wife is that I do need a space to call my own. It doesn’t have to be a whole room (obviously that’d be ideal), but a space where I can be myself, where I can celebrate the things that make me unique, reflect on the simple times and hog three televisions at once. 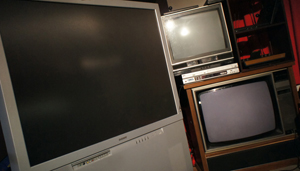 Do you have a room or space that is just for you? How do you keep your sense of self now that you have taken on the role of parent?