I call it the “Walking Hour”.

That time between three and four every afternoon when little ones need that last little nap but refuse to sleep in their cots. It’s also the time when Mamas need to get out of the house and just hit the pavement.

You see them everywhere – Mums with sunglasses and hats on, stoically putting one foot in front of the other. Little feet sticking out from under wraps, prams always moving so the grizzly baby inside won’t wake.

With my first daughter, this walking hour was my sanity. My darling little one wasn’t a great feeder, or a greater sleeper (they go hand in hand really, don’t they?) so every afternoon the only thing I could do was walk. And walk. And walk.

I’d get to three o’clock and head out the door, using the rhythmic pounding of my feet as a sort of metronome for the thoughts in my head.

What was I thinking about?

To be totally honest, it was mostly thoughts of how much I was struggling. How badly I was doing as a Mum. What routine I was going to try that night in a vain attempt to get some sleep.

It was a walking mantra of negativity.

Before motherhood, I was a very successful producer for ABC radio. I’d faced some serious challenges in my life, but had always been able to rely on my strong sense of self and my ambition to get me through. I’d even spent a year in Japan at the age of 15 with a host family who didn’t speak English, so nothing could knock my spirit.

Until I became a mother, and my sense of self was rocked to its core.

Why couldn’t I get this right? Why was my baby not happy? What was I doing wrong?

And beyond that, who am I now?

Without the prestige of a role in the media, and the daily challenge of an exciting job to talk to my friends and husband about, my whole identity had changed. I was totally lost.

As so many woman of my generation are.

Since then, I’ve spent the last six years researching, interviewing and writing about motherhood. Not about sleeping techniques or problems breastfeeding – there’s enough of that out there! – but about the changes we all go through when we become a parent. The real changes.

I write what I wish I could have read during those tough early days of being a Mama.

I’ve spoken to some of the most inspiring women I know, and some of the top health and wellness experts in the world. Think Louise Hay, Cheryl Richardson, Therese Kerr, Antonia Kidman. I’ve written about Buddhism, meditation, affirmations, detoxing and green juice, yoga and chakras. I’ve poured myself into figuring out how successful and driven woman can embrace this time as mothers and be truly happy with their lives while raising their little ones.

And this is what I’ve discovered:

Being a Happy Mama is all about how you think about being a Mum, and taking small steps towards putting yourself and your wellbeing first. Every single day.

Of course we love our children – that is a given. There is nothing more fulfilling than being a Mum to our little ones. But we have to love our journey too.

With just a little bit of self-care every day, and a change in the way we speak to ourselves, we can be truly happy.

We can love being a Mama.

Now, six years later, I’m still doing the ‘Walking Hour’. This time, I’m accompanied by my six year old and four year old daughters on their scooters, as I push my five month old son around the block. And this time, it’s a very different mantra in my head.

“You are doing an amazing job.”

Amy Taylor-Kabbaz has been covering breaking news as a senior producer with the ABC for more than a decade, is a columnist with Nature and Health Magazine, and a Mama of three. After the birth of her first daughter, however, she struggled to find a happy balance between the over-achieving super career woman and the caring mother she wanted to be. Then, 18 months ago, she began her blog – and became the voice for thousands of other modern day Mamas experiencing the same challenges. 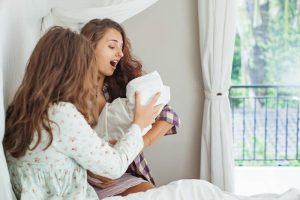 10 Gifts for New Mums for All Budgets