Febrile convulsions in babies and children 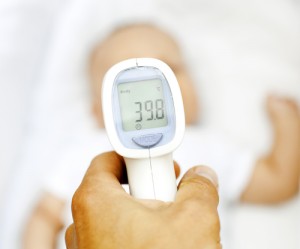 Febrile convulsions are seizures accompanied by high temperature in children aged between six months and about six years. They are actually relatively common (about 3% of children will have one).

Although they are terribly scary to witness, they are not necessarily a sign of serious infection (in fact they are often associated with run-of-the-mill viral infections) and don’t cause brain damage or long term effects. Most do not require any special follow up apart from determining (and treating if necessary) the source of the fever.

Main features of a febrile convulsion

The main feature of a febrile convulsion is fever (although it may not have been noticed prior to the seizure). The child will loose consciousness, their eyes often roll back, and they may stiffen and have jerky rhythmic arm and leg movements. They may go blue. Febrile convulsions usually only last seconds to minutes, but they almost always seem a lot longer.

The most important thing to do if this happens is stay calm and ensure the child is safe, which includes;

If you think of it (and often in the panic you don’t so don’t stress if you forget) look at a clock so you know approximately how long the seizure lasted and make note of what happened or video a bit on your phone.  This can help the doctor confirm the diagnosis of simple febrile convulsion.

If you did not feel the need to call an ambulance, once your child has recovered, get them seen by a doctor promptly. The main purpose of doing this is to determine the source of the fever. Often the cause is a viral infection or ear infection but it is important to rule out more serious infections like meningitis.

Of the children who have a febrile convulsion, many will only have the one. However, if they are under one when they have their first, they have up to 50% chance of having another with another fever. By the age of three, the recurrence rate is probably about 20% with subsequent fevers. Interestingly, giving panadol or ibuprofen for fever does not actually reduce the risk of a child having a febrile convulsion (but is still worth doing for comfort if the child is miserable).

The risk of developing epilepsy with one simple febrile convulsion is about 1-2% (about the same as the general population risk).  If there are risk factors for developing epilepsy (such as family history, developmental concerns or complex febrile convulsions) the risk may be higher. One risk factor gives about 2% chance of epilepsy and more than two possibly up to 10% chance.

So remember that although dramatic and scary to watch, if your child does ever suffer a febrile convulsion, you can be confident they are likely to fully recover with no long-term problems. The most important thing is ensuring their safety during/just after the convulsion and seeking medical attention to clarify the diagnosis/determine the cause of the fever.