Tips to keep unswaddled baby in one place when asleep 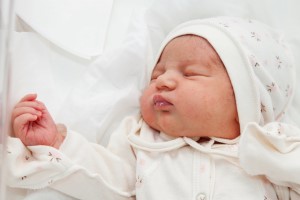 Looking for hints and tips to help my 4mo ds stay in one place while he sleeps!?! (If that is even possible!!!) he doesn’t wear a sleeping bag/gro-bag and isn’t swaddled and he doesn’t like being tucked in too tightly; hence the difficulty!!! Up until the last week he’s been perfectly fine, but he’s so desperate to be on the move – he rolls and commando shuffles all over the place – even in his sleep!!! He’s waking up 5+ times a night now because he’s cold due to having shuffled up the other end of his cot, rolled over and got himself wedged in a corner with no blankets (we live in TAS). Any suggestions to help him stay where it’s nice and warm!?!