Breastfeeding twins it can be done 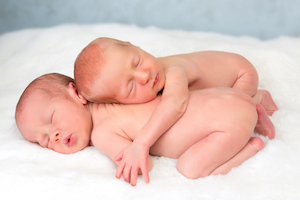 Breastfeeding one baby can be hard enough. But breastfeeding TWINS? Yes, it can be done. Gold Coast Mum Blogger, Lauren shares her experience with us!

“Breastfeeding is something that for many people, myself included, requires a lot of determination, perseverance and patience.
When my first daughter was born, breastfeeding also involved pain, tears, shredded nipples, and nipple cream before things started to improve at around the six week mark. I went on to successfully breastfeed my daughter, and then a baby son, til around 15/16 months each when they dropped their last feed.

When I found out I was pregnant with twins, I was determined to breastfeed them, but doubted my ability and whether I would have enough supply. My other concern? How the heck I would juggle it with two other toddlers jumping all over me?

During my twin pregnancy I watched YouTube video demonstrations to become familiar with the different positions and methods of tandem breastfeeding twins.

When my twins were born (induced at 37+1, vaginal deliveries 13 minutes apart with twin 2 footling breech, weighing 6lb6 and 6lb3), I fed them together and separately.

Getting both of my girls to latch – at the same time – was quite a feat in the early days. As soon as one was happily feeding, the other would come off and I’d have to readjust getting the other one on without disturbing the other one. I had to hold my breast for many feeds to help twin 2 to be able to latch better.

We were home on day 3 and I spent all day every day on the couch, using my trusty breastfeeding pillow – a leather contraption with a Velcro strap I hired from my local Multiple Birth Association.

* Hire/buy/borrow a twin breastfeeding pillow
* Get comfy and arm yourself with:
* Bottle of water to keep yourself hydrated
* Burp cloths
* Phone
* TV remote
* Toys/ kids’ books to help keep any other children amused while you’re busy feeding babies. (I spent so much time on the lounge so it was handy to have books/colouring-in items nearby so I could also entertain my two toddlers, while I was busy feeding the twins). 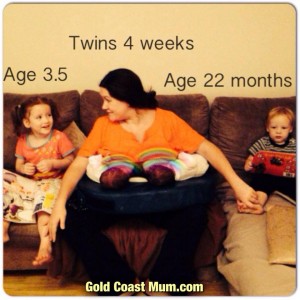 If I was home alone with the kids, I would put the babies in two separate bouncers and place right next to my feeding place on the lounge. I would wrap the twin breastfeeding pillow around my waist, sit down and gently lift each of the twins up and into position on the breastfeeding pillow. Other options include positioning bubs either side of you on the lounge, but I found it safer to keep them strapped in the bouncers and then lean forward to lift them onto my lap/breastfeeding pillow. I was soon a pro at scooping up both babies from their basinets, carrying to the lounge room and sitting down to feed them, and then burp them at the end.

If hubby was home or someone was visiting, I would sit with one baby and then they’d bring me the other baby so I could latch them on, and then someone would take one at the end of the feed for burping.

For me, the easiest way to breastfeed twins has been having them in the football hold – both of their heads touching in front of me and their legs out under my arms.

Feeding when out and about:

If I was out and the twins were due for a feed, I would usually feed them separately (if they would oblige).
I would feed them at the same time if there was somewhere kind of private where I could prop a pillow/blanket under their heads.
I also felt more comfortable wearing the all-in-one maternity bra singlets under my tops, so that I could position bubs, unclip my singlet/bra with one hand and lift my top to latch bub on without flashing too much skin.

Other hurdles to twin breastfeeding?

My twincesses showed all the signs of tongue ties in the early weeks, so we had them assessed by a lactation consultant who confirmed their tongue ties.
The girls had their tongue ties snipped (a quick procedure at the hospital) at around 4 weeks and their breastfeeding ability certainly improved.

This is something I was lucky to not experience during my breastfeeding journeys with my other two children, but unfortunately it got me real good when my twincesses were a few months old. I woke at 5am with a fever and knew straight away that it must be mastitis.
I called the house doctor who prescribed an antibiotic which I started taking asap.
The symptoms worsened, my breast was red, swollen and felt like it was on fire. It was also engorged and hurt so much to feed, but I knew I had to persevere as continuing to feed and drain the breast would help. After a few days of being very unwell (hubby would bring the babies to me in bed for feeds), things started to improve and feeding returned to normal.

Some days, well for many weeks actually, it sure did feel like all I did all day every day was feed feed feed. And there were times I seriously doubted my own supply.  My twin girls had colic, so went through unsettled periods, where I thought ‘well they just mustn’t be getting enough’, ‘it’s time for bottles’, and sent my hubby out to buy a tin of formula as I just couldn’t do it anymore. But once I’d had a moment and recollected myself, I realised my girls were piling on the weight and producing lots of wet nappies etc, so were well and truly thriving. Plus, it was just easier to put on the breastfeeding pillow and put those babies to the breast. My bubs would have a side each, per feed, and I would ensure they were on opposite sides for the next feed.

If I was engorged and the bubs were sleeping, I would pump so that I could build up a stash in the fridge/freezer so that hubby could help out, or so the bubs could have bottles in the early evening when they were unsettled, but we soon worked out that this didn’t fix anything, they weren’t upset due to being hungry, they were just unsettled at this time. So after a couple of weeks of trying that out, I stopped pumping and just kept breastfeeding and that worked perfectly.

I demand fed and the girls soon developed their own routine. From 4pm-9pm each night they would cluster feed.  So I’d be stuck on the lounge feeding most of that time. So we’d cook dinner during the day so come dinner time, all we had to do was serve up and heat the dinners. By a few months old, the babies had stretched out their feeds and were sleeping 10/11 hours overnight. Bliss!

My mantra has always been: ‘If in doubt, boob. If bub is unsettled, boob. Boob fixes everything. Just keep on breastfeeding.’

It’s also beneficial to set small goals and congratulate yourself when you reach, and surpass, these goals.

I’m glad I stuck at it. For many reasons; the bond, the health benefits for bubs, and the convenience (anywhere, anytime, right temperature, no equipment or washing up required) and cost (FREEEEEE).

Breastfeeding twins is one of my greatest accomplishments.  My twin girls are now 20 months and breastfeed once in the morning and once in the evening.

As always, if you have any medical concerns, please speak to your medical professionals. For breastfeeding support and assistance, contact the Australian Breastfeeding Association or contact a Lactation Consultant in your area. 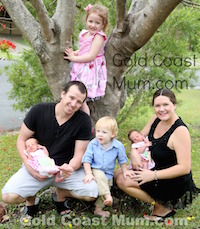 About the author: Gold Coast Mum editor, Lauren Paris is a mum of four (including TWINS), who, after a 14-year career as an award-winning journalist & editor, blogs about all things Gold Coast as well as topics including: parenting, pregnancy, twins/multiple births, breastfeeding, reviews, giveaways, travel, entertainment, what’s on and more.
She loves a good celeb sighting and is passionate about safe sleeping, car seat safety – extended rear facing, and making informed parenting decisions.
Lauren’s also a karaoke queen, social media addict, a fan of dance fitness, a lover of all things 90s and 00s music, & a former golf widow (with 4 children in 3 years, hubby rarely has time for golf these days!)