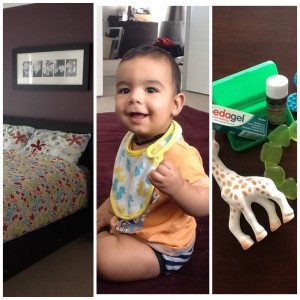 Owen is nearly 7 months old now and is certainly giving me some stories to share these past couple of months.

His first teeth have come through, and let me tell you, that was painful!  Not only for him but for me too.  Sleep was fairly non-existent for me for about 3-4 days while they were coming out.  What I thought was teething 8 weeks prior certainly wasn’t and gave me a hell of a kick up the bum when the real thing happened.  The thing is that he’s got teeth that are just under the gums that aren’t ready to come out until another 5 more come through so it’s going to be a rough ride.  They say that if teeth start to show out of order and before they are ready that the baby suffers just that little bit more.  Typical, we don’t do things in order!  He’s also been wearing an amber necklace and anklet to help with some of the symptoms but all he really wants to do is put everything in his mouth and give his gums a good ‘ol rub.  Poor thing, I know I don’t handle tooth aches too well so I’m sure it’s no picnic for him either.

We’ve been mastering rolling in this house and he’s a pro now, only going from back to front and has forgotten how to go back the other way which is a bit frustrating when he is on his tummy and doesn’t want to be!  He’s quite stable when sitting unassisted which is exciting, he looks less like a little drunken wobbly baby and more like a little boy now..eeck, he’s just getting big so quickly and I want to press pause for a little while.

And since the rolling is such a hit we decided that maybe we should let his arms out when he goes to bed at night as he frequently ends up on his tummy at some stage.  We normally have him in a sleeping bag all zipped up, he can be all arms and legs if he’s not contained and fidgets too much.  And now that he’s got some teeth that are bothering him all he wants to do is get his fingers in his mouth and rub his gums.  At first I thought he was going to be awake for ages and ages as he’s normally well contained but the first few nights were a breeze, sucked on his fingers and settled himself to sleep.  Since then we’ve had a few bumps along the way but in general he’s been ok.  He’s even getting better at self settling during the day too which is something that I’ve been struggling to ‘train’ him to do for a while now.  Such a relief.

We moved Owen into his own room 6 weeks ago.  I felt that maybe our night time movements (and not the kind you’re thinking of) and snoring were disturbing him and wanted him to have his own space (and our own space too).  I thought it would be harder to do the longer we left it and felt 5 months was a good age.  Actually, he took to it quite well.  He did a few day sleeps in there at first but the problem was I had to use his basinet that he’s far too big for and he wasn’t all that comfortable.  So I figured, why not to just move him and we’ll deal with the consequences if there are any.  And he was fine.  Result!

Owen had his first fall about 7 weeks ago.  He’d just had a bottle and I propped him up on a pillow on my bed so I could get dressed to go out for a walk with him and the dog.  I was standing right next to him, taking my pyjama top off, and next thing I know he’s rolling off the pillow, off the bed and face first onto the floor!!!  Oh my god, I’ve never felt fear quite like I did in that moment.  And the thing was I nearly caught him.  It was awful.  I rang Healthdirect straight away and because of the height of my bed and his age it was recommended we go to the hospital.  Thankfully it was only a superficial injury to the forehead and we were cleared to go home but to keep a close eye on him.  Worst.  Day.  Ever.  Please mummies, if your baby is getting more mobile put them somewhere where they cannot hurt themselves, I learnt the hard way!

He had his 6 month needles a couple of weeks ago and we had another couple of disrupted nights, waking every hour from 1am…. arghhh!  And he’s developed a yucky cold too so he’s snotty and coughing in the night.  I tell ya, sleep deprivation is definitely a form of torture.  Actually I’m sure bad people use it as a form of torture, right?

We’ve had some good weeks and some bad weeks, but each day I learn something new and so does he.  I was really struggling for a little while there and then all of a sudden things started to fall into place and the clouds cleared and all was good again.  It’s so hard to keep in your mind that “this is just a phase and it will pass” when you’re in that moment but truly, it does.

Until next time, happy mummying!