Should we be asking babies for consent before changing their nappy?

Anyone who has spent any time with children will know that the word “no” is a highly overused staple of the toddler vocabulary. So when author and educator, Deanne Carson, appeared on ABC News suggesting that parents should ask their babies for consent before changing their nappy, the reaction was swift.

To further clarify Carson’s comments; while she acknowledged that very young babies are not capable of answering the question “Can I change your nappy?” she did encourage parents to wait for body language and eye contact cues to indicate consent and allow your child to know that their response does matter.

Dubbed Nappy Consent-Gate, Carson’s comments have divided parents and commentators. Is this a case of a common sense approach to teaching children consent or modern day parenting gone mad?

What if they say no?

Many have questioned the practicalities of asking a young child for consent for something as mundane as a nappy change, particularly given the frequency of the task each day.

If they say no, does that mean you deal with the consequences of an almighty nappy rash when they finally relent? And what about those rare unicorn parenting moments where you manage to pull of a midnight nappy change without waking the baby? If you take a consent approach, do you need to instead wake the baby, ask for their permission to change the nappy and risk them not falling back to sleep when the job is done?

More than a simple question

In a comment since her appearance and the widespread reaction, Carson has responded:
“I gave an interview the other day about teaching consent to young children. “Sadly, some people have chosen to ridicule me (oh no! Pink hair! Must be a lesbian!) and the notion of giving infants bodily autonomy (poo in nappies har har amiright?!)

The work we do with children, teachers and parents is international best practice in abuse prevention. It teaches children their rights AND their responsibilities and connects them with people who care and can help. It invites their parents into the discussion and is sensitive to cultural and family values.

“Troll me all you want, add to your blog inches, but remember that when you do, you are negating the voices of these brave survivors of sexual abuse.”

Opening up the conversation

Putting aside the storm of controversy for a moment, isn’t this a good thing that we are discussing consent and how we advocate for our children as their parents and caregivers. The statistics about child sexual abuse are horrific. If this debate does nothing more than highlight the dangers and start each of us thinking about our role in teaching our kids about consent, is that not a positive?

We teach our children to share and play nicely with other kids. We teach them kindness, respect and manners. We teach them so many things each and everyday, so when the danger is so high, is consent not just another thing we should be teaching them?

We are parenting in a different world to the one we were raised in and opening the conversation with our children up to topics of consent is a vital role we play in forming our children for the future. Whether you are asking your child for permission to change their nappy or empowering them to say no if they feel uncomfortable in a situation, it a conversation we need to have.

How do you feel about Nappy Consent-Gate? Will you be asking your baby for permission to change their nappy?

Sara Keli lives in Sydney with her husband, daughter and their cat and two dogs. She loves everything pink, drinks way too much tea, doesn’t drink as much wine as she used to and can never sit still for more than 10 minutes.Sara is the Editor and Chief Kid at Kid Magazine a blog and digital magazine for mums who like style, pretty things and looking after themselves and their families. 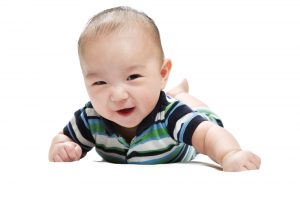