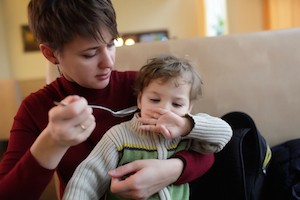 We’re having real trouble feeding our 20 month old. He just says ‘down’ or gives the ‘finished’ signal almost immediately after he’s started to eat. It’s really stressing me out because he’s already so little for his age. We’ve tried playing with meal times, mixing up the food we offer, eating as a family, no snacks before meals and he only has a small amount of milk before bed these days….. Looking for any other tips or would love to hear from others that this is just a toddler not eating phase they all go through….

Did your toddler go through a not eating phase? Share your experiences below.