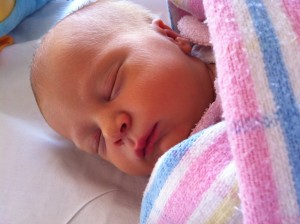 I just gave birth. I was terrified of the whole process, that was until I went into labour. Leading up to my due date I started to worry about what type of mother I would make, how my partner and I would cope with this new addition and how my life would never be the same again.

What I didn’t bargain for was him walking out just two days before I went into labour at 38 weeks. So if I was worried before, this made things ten times worse. To hear that someone doesn’t care about you anymore and hasn’t for a while can really get to a person, even more so to a woman who has just been carrying his child for the past 9 months and getting ready to raise this little gift together with hope, happiness and love.

My labour begun when I woke at 4am to find what we later discovered was my water breaking. At the time it was pretty nerve racking as instead of clear water coming out of me, it was as if I had just gotten a period after 9 months of keeping it all in! My parents (bless them for being with me through ALL of this) rushed me to the hospital where they hooked me up to monitors making sure baby and I were ok. And there I stayed for the next 12 hours, having contractions every 10 minutes and being 1cm dilated. Eventually they moved me into a maternity room to stay the night and keep an eye on me.

My contractions were getting stronger at this time but still only 10 minutes apart. I was instructed to rest in bed and not to do any walking around due to the bleeding, they had no clue what was causing it at this point. At 8pm my parents and two close friends were whisked away as visiting hours had ended. Worried I wouldn’t be able to sleep with my constant contractions, my midwife gave me sleeping tablets – they lasted all of 2 hours. So from just after midnight on the 6th of November 2012 was the start of no sleep for me!

In the morning I had a doctor come check everything out and they measured me at 2cm dilated. For some reason, and I was so happy about it, they decided to move me into a birthing unit and break my waters at only 2cms. It was at this point that I started to get excited…my midwife explained to me that she finished at 7pm that night and she would be getting this baby out of me before then! My father asked if she thought we would be able to get her out by 3pm in time for the Melbourne cup to which she laughed and made no promises.

I have heard a lot of horror stories over waters being broken, but when mine were broken I felt nothing. We then discovered that my waters had already broken when I started bleeding. They were going to give me something to speed up my labour but decided to wait for a while, as it seemed the baby’s heart was dropping every time I had my 10 minute contractions. These then sped up to every 5 minutes, at which point I promptly insisted on getting gas. Gas was my friend, I’m not sure how I would of handled these without the gas!

The doctor advised me that my child would have a very hard time coming out and that the best thing to do would be a c-section. I happily agreed as I wanted what would be best for her, and had always felt from day one to just go with whatever the hospital recommends. While waiting for the operation I confided in mum through many tears my doubts. I was so worried that I wouldn’t love my child after him leaving us, I was so anxious and upset as this was not what I had planned out for my life. She comforted me and explained that I wouldn’t be getting this upset or doing what’s best for her if it wasn’t for the love I already have for her. The drs were ready and said they were going to take me down to theatre now, the hardest part at this point was leaving the gas behind while I put up with the pain!

I was about to experience the most beautiful moment of my life and I didn’t even know it. They pushed me into a room filled with about 30 staff where they all did their part to prepare everything. All I could think was how cold it was in there. They did my spinal tap, started cutting me open and then let  my mum in for support. It all of a sudden became very real to me and I could do nothing but cry. We then heard a high pitched scream and saw a baby covered in goo for a second before they took her away from me to clean her up. I was highly emotional by this point and they explained to me that the cord was wrapped around her neck four and a half times so it’s a good thing I had the c-section done. They then rested her on my arm where she just looked at me with her beautiful eyes. If I could go back and re-live that moment when she was born I would, over and over again. I had no doubt from then that I would love her! It upsets me that her father will never understand or know what it felt like to be there experiencing the birth. But with the choice of only one support person, I needed my mum…she was the one who had been so supportive of me already. She was born at 1.12pm, she beat the horses even starting their race!

This past week has been an emotion roller coaster. I can imagine it would be after just giving birth in normal circumstances, but after her father leaving and the fact that my child may not have survived without the c section really shook me up. For the next five nights I had no sleep, my little one decided she likes to cry at night and be an angel during the day! I’m honestly not sure how I managed to pull through with an hour sleep each night? She finally had a fantastic sleep on my last night in hospital only waking twice for a feed every four hours! It was a blessing to get the much required sleep.

Due to her father leaving us, I had no choice but to pick up and leave my life, moving four hours away to live with my parents for the time being. This way I will have all the support my little one and I need. She didn’t deserve this, she didn’t choose to be brought into this world without parents together, loving each other, but sometimes life throws you off course. Everything I do now is what’s best for her. I’ll never do anything to hurt her. I would never leave her, she is my life now and I feel sorry for her dad who has chosen this life for himself and us, and even though he’s still going to be around for her he’s always going to miss all her first moments in life and he will never get that back.

What’s best for her is providing her a life she deserves.

Who is Louise? I’m a first time mum to my beautiful little Tessa. Every day I excitedly look forward to her smiles and developments while trying to hold it together as a single parent. I’m here to let you know how I’m honestly handling this scary but amazing life changing new direction in life. I’m hoping you can all relate and I’m not just going crazy! To see all of Louise’s articles, click here.