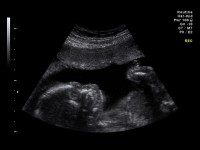 Im 24 weeks and I just seen my obstetrician and she said that my 20 week scan has shown 2 cysts on my baby’s brain. She said it is common and most likely will go away, if not it could lead to my baby having Down syndrome. Did anyone else have this? I have no idea what to think!

Have you experienced cysts on baby’s brain? Share your experience in the comments below