Toddler tantrums for the time-poor parent 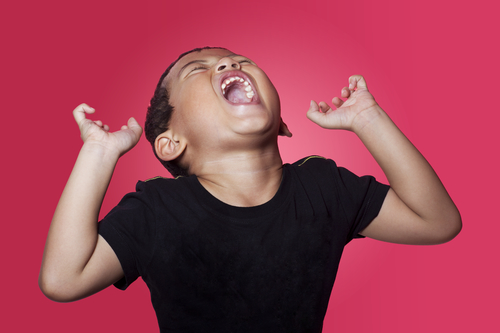 Listen, I’m pretty busy. I’m a mum, I work full time, I am someone’s wife. I’m a friend, sister, colleague, daughter, neighbour and all-round cool guy. I exercise, I socialise, I talk about doing the gardening and then go out in the garden and not actually do any of it and then come back in saying the sun is in the wrong position. I do a lot of cooking without eggs (there was an incident with a compromised frittata a few months ago that has left my husband and myself scarred for life, figuratively and also kind of literally). I read, I write, I spy on the neighbours, I am silly on the internet. To put it simply – I am flat bloody chat.

As a result of all this flat chatness there are many things that I don’t have time for. I get my groceries delivered because I hate the idea of spending any of my rare, precious alone time trapped behind awful couples arguing in front of the cat food as their trolley outrageously blocks the entire aisle.  I take the tollways not because I’m wealthy or to show my support of infrastructure developments but because I calculate opportunity costs based on what fun stuff I could be doing INSTEAD of sitting in traffic. On the occasions I do actually go to the supermarket I bring all the bags inside in one trip because I am equal parts stubborn and ridiculous and am focused on the ruthless completion of tasks. I use an app called Wunderlist that’s effectively just to-do lists that make a satisfying ding when you finish items and, goddamit, I will go a very long way for those dings. You don’t want to know what I’d do. What I have done. Where I’ve been.

Sorry, that went to a dark place.

Anyway, my long-winded point is that THE LADY IS BUSY. I am the mother to a two-and-a-half-year-old boy who has on more than one occasion been described as “intense” so with that comes the charming inevitability of the tantrum. At home, at restaurants, in the car, in public, at childcare, at my work, at my wedding, while I’m on the toilet. He’s an 18 kilogram, enthusiastic, reckless, long-haired party machine and if anything dares disrupt his vision of how the world should work he shuts that shit down faster than a mother’s group laying into a plate of pastries. “Oh, I really shouldn’t, but I’m going to be naughty just this once”. Don’t lie, Andrea. We all know you eat almond croissants in the shower. You’re only lying to yourself.

As a result of being the time-poor mother to this bizarre whirling dervish child, I have devised a cunning scheme wherein I harness the power of his tantrums for good and use his complete inability to listen to reason to help me get shit done. Rubbish, you say. Pish posh. You’re lying. Well, first of all how dare you question me in my own article and second of all get your peepers around this because I am about to hit you with some next level multi-tasking realness. KABLAM.

You’re trying to get the floors done because your mother-in-law may or may not be coming around later (she never does specify a time, does she? Likes to keep you on your toes) and you just cannot deal with another passive aggressive comment about how she always seemed to have time for cleaning even with four under her feet. Suddenly, little Percival goes from quietly pushing his cars around a track to hurling them out the window and then starts doing his best screaming impression of an octopus with a penchant for line-dancing. It’s limbs everywhere and the clock is tick-tocking away to Judgement Hour. What do you do?

Don’t panic and chug the cooking wine, baby! Deftly grab those little limbs and attach a different cleaning product to each of them. A sponge, a bottle of Jif, a duster and some Glen 20. Send him spiralling down the hallway on his merry way and relax in the knowledge that the hallways will be sparkling and your little charmer will be so worn out from his relentless pinwheeling that he’ll soon wear himself out and be back to beautiful behaviour quicker than you can say Sauvignon Blanc.

Picture this. You’re doing a wardrobe clean out because it’s a change of season and you’ve realised that the days of you legitimately being able to wear ripped tank tops with band names on them are very far behind you. You’ve started the arduous process of clearing everything out when in comes Tiny Mighty with a bug up his butt because his sister/the dog/himself in the mirror looked at him wrong and he is not taking anyone else’s shit today, no sir!

Point that furious George into the wardrobe and let him take his frustration out on the clothes. You’ll soon see tops you haven’t clapped eyes on in years come hurtling out towards you and those jeans you thought your husband threw away will be unearthed from their premature burial ground under Handbag Mountain.

Now all you have to do is sort that crap into piles, label it “Donate”, let it sit in the boot of your car for four months and then drop it off at a charity bin under cover of darkness on your way back from the late night chemist. Sorted!

Method 3: The social occasion finisher (for professionals only)

We’ve all been there. That social event that is just dragging on and on. Every time you think it might be time to go and you start doing that Gough Whitlam “It’s Time” eye contact thing with the person you came with some new idiot starts talking to you about something you don’t give a shit about. It’s a Sunday afternoon, you haven’t done the groceries or the lunches, there’s still washing on the line and Netflix misses you. You need to get out of there and you need to get out of there NOW.

Enter The Destroyer. Look at your little cherub. She is so adorable. Playing nicely with the other kids, saying please and thank you. You know her dark side and you need to get little Carrie to come out and play right now.

The tantrum will come. Oh my, will it come. You’ll say it’s such a shame and you’re so sorry to leave so soon, the party’s just kicking off, but inwardly you will be awarding your child “Best Team Player” and throwing a confetti parade that you managed to circumvent yet another conversation with Boring Gary. Bloody Gary. He is just the worst.

So there you have it. It’s not a definitive list, by any means, but I’m sure you can think of a few more uses for tantrums in your daily life. Small, portable foghorns. Surprise cardio workouts. A chance to practice public speaking as you draw a considerable crowd. Our children really are such a joyful investment of our time and energy – I figure, let’s start making some returns.