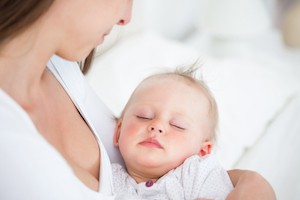 My little boy is almost 5 months old. He has never really liked napping during the day but it was easy to rock him to sleep. This past week he falls asleep quite easily in my arms but screams the second I put him down in his cot. As soon as I pick him up he resettles in my arms. We go through this five or six times until he eventually falls into a deep sleep and I can put him down into the cot. Has anyone experienced this with their little one? Is it just a phase?

What tricks do you have for putting baby to bed once they are asleep in your arms? Share below