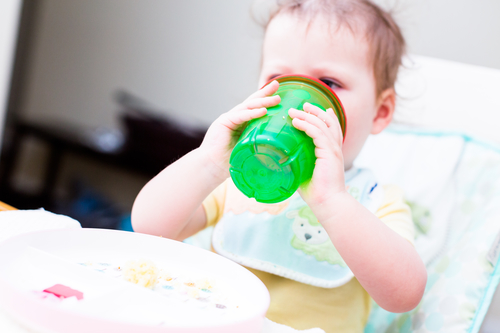 I’m after advice on how to wean my 10.5 month old from having his formula in a bottle to having it in a cup/sippy. I have tried him on a cup with a firm spout that is free flowing & he refuses it. How have other mums transitioned milk from a bottle to a cup/sippy?

You just keep trying try different cups maybe one with a straw. Jess

My boy is still on the boob and I’ve gone straight to a straw water bottle for water. He surprised me and took to it straight away. Rachel

I just kept buying different ones… Nuk, tommee tippee, avant, own brands. I tried hard and soft spout, raised, flat and he is now happy with a straw bottle with handles. I bought cheapo one from bigw aswell which he also likes but not as much as no handles. There are a lot of choices so trial and error I guess. Sarah

My son is 9 months and drinks from a straw rather than a spouted cup. At least then he can control how much he gets. I often give him a 2 handled open cup and he spills alot but he does ok. Try with water first so your not wasting formula. Shanelle

Try the magmug 3 stages cup. Has a bottle teat, latex spout and straw. My son used this to start with. Catherine

Around 9 months, I started giving my little girl her water in one of the B Box straw cups and I’ve only just at 13 months decided to transition her with her milk, to stop using bottles. I’ve tried several sippy cups but so far the B Box straw cup is a hit. She loves having her milk in there and I’ve got different container to use in a few months as she gets closer to 18 months. Amanda

Have you tried a straw cup? My son rejected every sippy cup I got him (I have a cupboard full of different types). Then I got recommended the B.Box weighted straw cup. Took him about 30 seconds to work it out and he loved it. Sarah

My son wouldn’t take any other cups after trying 5 or 6 so bought a b.box sippy cup as a final attempt and he drinks heaps from it. It has a weighted straw so doesn’t matter how they hold it they can still drink from it. Donna

Nuby straw cups worked for us after trying and failing with all sorts of spout cups. Just have to teach them not to tip it up like a bottle. Salleigh

Close to nature sippy cup has a removeable valve inside and i found this best as the flow required some good sucking like a bottle. Shiree

Nuk have a sippy cup with a soft spout and I use it for water and my daughter loves it. She’s not keen on hard spouts. This spout is not as soft as her milk bottles but it’s not as hard as most sippy cups. Keryn

Maybe wait another month or 2. It might b more he’s just not able to more then he doesn’t want to. My son went straight onto sippy cups without issue at 12 months but wouldn’t have been ready earlier. Aileen

love the Sipsnaps! They stretch over any cup and turn it into a straw cup. There is also sippy cup versions available but I got my little guy off bottles using these. Kimberly

tought my son how to drink from a cup with the cover top of his bottles his were long and thin used a shot glass when I forgot to take it out with me once it worked well to just a little at a time till they get it idea or it will be every where but the smaller size is easer to grab with little hands. Kirsty