Expectations on children to show affection in public

Lou takes on another tricky issue in this article about social niceties. She delves into the expectations on children to show affection to people they may not feel comfortable around. She argues that she doesn’t ask her child to kiss and hug people, and suggests you shouldn’t either. 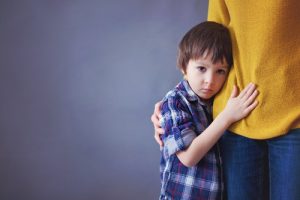 Being forced to go to bed when you want to stay up and play. Being asked to eat food that you’ve never seen before and you’re DEFINITELY sure that you’ll hate. Not being allowed to do all the fun things like swing on the curtains or ride around on the dog.

There are so many aspects of your life that you’re not in control of. Constantly being poked and prodded. Put in the car, taken out of the car. Buckled into prams, carriers or slings. Suncream on. Hats on. Shoes off. Pyjamas on. Socks on. Socks off. SOCKS ON AGAIN.

Outside of things that are for our children’s health and safety, what else do we ask our kids to do with their bodies?

Think about it. Think really hard.

Think back to when you were a kid.

Expectations on children to show affection

You go somewhere with your parents, a family gathering or reunion or work function or omething. You’re small and nervous and unsure. You sure as shit don’t want to besnding around a bunch of old people but here you are, awkwardly in your Sunday best, sweating down the small of your back and thinking about watching Looney Tunes.

Suddenly, some random old person launches at you from the shadows proclaiming how they knew you when you were knee-high to a grasshopper and haven’t you grown and aren’t you DELIGHTFUL. You stare up at your parent, wide-eyed, like a deer in the headlights and silently plead with them to rescue you from this unknown and unfamiliar creature.

Your parent smiles down at you, beatifically. Like you are a tiny, gorgeous prodigy and not the kid they were yelling at ten minutes earlier in the Torana to, “Knock it off, Sheryl, or you’re not getting bloody chip sandwiches for dinner!”.

Your parent then pushes you towards the walking corpse and says, “Give Aunty Decrepit a big hug and kiss, sweetheart. There’s a good girl”. You freeze, trapped in a vortex of social niceties, while some old person who you don’t know slobbers on your face and makes you feel like…

Like you are not in control of who can touch your body and when.

I know, for some of you, that might seem like an extreme jump to make. “Pish posh,” you say in my imagination, “It’s harmless! She’s a relative! It’s not like she’s a paedophile! Ridiculous!”. I agree that Aunty Decrepit is, at her core, not a villain (though her breath would say otherwise) but the problem is not in the messenger but in the message.

If you push your children to show physical affection to people they do not know, or they do not want to touch or have touch them, you are saying to them that the polite and good thing to do is to go along with things you are uncomfortable with.

If an adult asks to hug my child and my child says yes then that’s great. My child is an excellent hugger, up there in Australia’s top ten snugglers. If an adult asks my child for a hug and is told no? Then no hug for you.

Think about your reaction here. Am I a bad mum for not forcing a small child to make themselves uncomfortable so you, a grown adult, do not get your feelings hurt? If you pretend to cry to manipulate my child into feeling GUILTY so they TOUCH YOU – can you see how that might be a problematic message? Is the affection more genuine, more real, if it occurs when the child in question wants it to – or when they don’t want it to?

We need to think bigger. Bigger than Aunty Decrepit. We need to think about ideas like consent, body autonomy, body ownership and the managing of adult emotional reactions. If you are going to lose your shit because I didn’t force a three-year-old to give you a kiss when they didn’t want to then you need to potentially unpack that in some kind of therapy.

“You have to be polite”

If an adult is going to get upset because I won’t force my child to do something then they’re not an adult I’m interested in my child being around. Kiss off, weirdo.