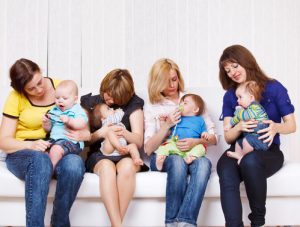 When I was pregnant with my son, I remember someone asking me if I planned on joining a mother’s group.  I hadn’t given it much thought; I was too busy being pregnant to think about what I’d be doing after I had the baby.

Crazy I know, but the ache of IVF meant that I had approached motherhood with my head in the sand.  I couldn’t allow myself to think I would actually end up with a baby much less think about what I would do once I was a mother.  Mother’s group was as far from my mind as sleepless nights and sticky fingers.

Oddly enough, this same person suggested to me that it probably didn’t matter I hadn’t given it much thought because she didn’t think I was a “mother’s group kind of person.”  Three years later and I still don’t know what she meant by that which is just as well because it turns out I’m very much a mother’s group kind of mother.

I’ve said before that mother’s groups don’t always get the credit they deserve.  I’ve heard some horror stories about other people’s experiences and since you only know what you know, it’s not something I can comment on because I’m a mother’s group advocate.  My own experience was easy.  Fun.  Light.  Simple.  I mean simple in that there were no complicated personalities, no snippiness.  Not so simple leaving the house so soon after having a baby but that’s also the very reason to do so.  Going to mother’s group was one of my first outings on my own. Although I remember arriving looking remarkable dishevelled and wildly out of my depth, I was in good company.  Nobody cares if you are wearing pants with an elastic waist band just as long as you are wearing pants.

So here are 5 reasons why you might also be a Mother’s group kind of mother (and it is okay if you’re not).

You get to make friends outside your friendship circle

I have close girlfriends who have absolutely no connection to those who I know from my mother’s group and I’m cool with that.  Sometimes it’s easier to talk about stuff outside your immediate tribe.  In my case (late to the motherhood gig) many of my friends had babies long before I did so mother’s group was my kinship.  I remember sharing my anxiety ridden thoughts with another mum who had the same feelings.  Together we were linked by an emotion that wasn’t always easily captured with words.  We kind of got each other.  It was a bit special forming a friendship as a result of being new mothers all within about six weeks of each other.

When I was a new mother, nothing felt normal, least of all your pelvic floor.  There is something strangely comforting knowing you aren’t the only person in the room that is leaking.  Mother’s group (and I mean the good ones) are an equal playing field.  Odds are in a group of ten or so women, someone is having the same issue as someone else.

No one is giving helpful parenting advice unless you want it

Even though we might all be experiencing the same dramas, none of us know what we are doing so no one is dishing out advice to you about what you should be doing.  New mothers do not need to be told about what they should be doing.  Fed and alive is the aim of the game.  It’s fine to talk about what everyone is doing or not doing, offer support and debate the merits of Huggies versus Baby Love but if you start feeling pressured and guilt tripped into breast feeding/sleep training/co sleeping/nursing to sleep then find another group.

Don’t ever underestimate the value of a play date especially when babies become toddlers.  In the early months of mother’s group the babies can’t even recognise their own toes let alone other babies so mothers’ group is all about the mothers (otherwise they would be called babies group).  As babies grow into tiny little beings and need constant entertainment and socialising, mother’s group is a not just a chance to catch up with friends, but an exercise in social development for your child.

No distractions (except for the babies, obviously)

You’ve got more chance of finishing a cup of hot tea when you are surrounded by other mother’s who are trying to do the same thing.  For some weird reason I could always finish a cup of tea when I was at mothers group but never at home.  At mother’s group there is no washing to be done and no dinner to sort out.  You don’t have to clean up baby vomit when you are at the park, unless of course, the baby vomits on your friend.  There’s almost always cake.  Sometimes even cake with a side of wine.

So whether you think you’re a mother’s group kind of mother, don’t be turned off by the myths and stereotypes.  In my case, and in many of those I know, the benefits far outweigh the effort of leaving the house.

I am a part time Recruiter, a full time mother and wife and I blog at Champagne Days.These are the confessions and chronicles of my life where madness and motherhood are not mutually exclusive. Almost always happily married to my music man, we have a funny, sweet and spirited little boy named Charlie.I’ve a penchant for Sass & Bide, champagne and Kikki K stationery. Ballet flats are cute and suit my lifestyle but I much prefer to rock a pair of heels. I’ll have a skinny flat white, hot please. At the moment I am desperately hoping that there will be a season six of Offspring but hopes are fading.
Underperforming ovaries meant that for a number of years I had to swap the champagne for chinese herbs and so Champagne Days is my story of before and after IVF and everything in between.