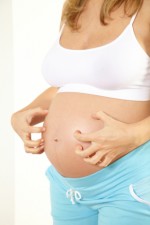 Has anyone had ICP? (Intrahepatic cholestasis of pregnancy) Did u get induced and when? Also did it affect your pregnancy at all?