We get a lot of questions from mums who have had a caesarean and would like to attempt a natural (or vaginal) birth next time. So, we have asked three of our regular commenters to share their VBAC experiences with you.

With my first pregnancy I had Vasa Previa, a dangerous complication with the placenta which involves blood cells in an extra lip that was under bub’s head so I had to have a caesarean. My first beautiful daughter (now 3) was born at 37 weeks weighing a tiny 5Lb3. With my second pregnancy there was no sign of the same problem so I got the go-ahead to try for a VBAC. I was very excited but also very nervous, I didn’t know how I would cope. I armed myself with as much information as I could find and went into it feeling empowered and in control. I was 2 days overdue when I went into labour at 11:30pm, I happily laboured at home until 5am when my contractions were 5 minutes apart and then we drove the 1 hour to our hospital. At the hospital bub and I were monitored for a couple of hours and moved to birth suites at 9:30am. That’s when the real pain kicked in and I started using the gas. At 12:40pm, after over an hour of pushing (with suction and episiotomy) my second beautiful daughter was born. She weighed a small but healthy 6Lbs and has thrived ever since. She is now 11 weeks old and very healthy and happy and I am very proud to have accomplished my goal.

This is our story about our daughter Mackenzie and her Brachial plexus palsy injury caused at birth. 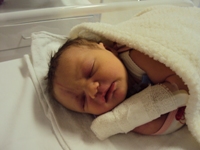 We were delighted to find our we were having our second baby, due late July 2011. Our son would be 2 and a half when she was due. (This age was frightening as he was well into the terrible twos) however we remained very excited. After a difficult birth resulting in an emergency C-section with our son (Riley) I was convinced that this birth would be a straight forward C-section, which a midwife at our first anti natal appointment agreed it was a good idea, and Whos words were I wouldn’t even bother trying natural) we were relieved as I did not want to go through that horrible experience again. At our 20 week check-up I happened to see the head doctor who sternly told me ‘don’t be silly you’re having a VBAC’. Wow! We were in shock. We discussed all the pros and cons and decided he was right we would give it a go! Our last scan at 36 weeks showed bubs was not going to be too big so a VBAC was on the cards for good now. I worked four days in child care my entire pregnancy after finishing work on the 15 of July 10 days before I was due I was excited to do nothing until baby was born. We joked that she would come the next day… to our surprise Saturday 130 am I started getting contractions, I could not believe it! The contractions progressed quickly with my fiancé recording the times as I yelled them out from the bath. We phoned the hospital when the contractions were-7 mins apart, she explained it call back when they were 5 minutes. Within a few short minutes they were coming on 2 minutes apart. We decided to say at home till I couldn’t take the pain anymore.

We arrived at the hospital and they were 2 minutes and I was 6 cm dilated already. We knew our baby girl will be here soon. My waters broke at roughly 9cm as I begged my midwife to check. It was time to push shortly after. One and a half hours passed and I felt weak my partner was amazing and so supportive encouraging me every time I doubted I could do it. our baby girls head was crowning but she was twisted sideways in came a doctor who decided to use the suction, this failed again and again so she used the forceps firstly to try and turn her which wasn’t working, she needed to turn her using her hand.. Wow I have never felt a pain like this. The doctor told me I needed an episiotomy and at this stage I couldn’t care I wanted her out. She made the cut right away and then with the forceps pulled with all of her strength (Clint said later her arms were shaking had never seen a woman pull so hard) at 6:59am Mackenzie Amy-Grace was born! She was beautiful and perfect to us in every way. We had skin on skin for a long time. It was amazing as I never got this experience with my son. A very proud dad was holding his baby when he noticed her right wrist seemed to be limp and somewhat “lifeless” he notified the nurse doing her obs and she hurried off to find the doctor. Their first response was blank, and then they suspected this was due from the forceps. Later our baby girl was taken to the special care nursery as she had a slight infection, my heart was broken, I’d just gotten her and now they were taking her away. The doctor on duty was told about her wrist and ordered an x-ray to rule out a break in the collar bone, arm wrist and hand. These came back clear which left NERVE DAMAGE! We were confused! How, when and why did this happen? and more importantly will she get better. The doctor explained this as a Brachial plexus palsy injury. There are two types of brachial plexus palsy injury 1. Erbs palsy, this typically results in paralysis of the shoulder and elbow generally leaving the hand fine, 2. Klumpkes which is the hand wrist and fingers .it is rare that all the nerves are involved which would result in permanent paralysis. The risk of having the injury when having an assisted birth with forceps is 1-2 in 1000!! Yet this possible life changing injury is so widely unknown and never ever discussed to mothers attempting a VBAC of who may need assisted births… this injury had been caused solely by the doctor pulling so hard on her head with the forceps. The force of the pulling had stretched or torn the nerves which run from the spine through the shoulder and into her hand. Her brain had no idea she had a little hand there. It just hung there limp and empty like, we ached for our baby girl and the guilt filled my entire body. This is my fault I should have trusted myself and had the c section I knew I needed. We didn’t know what to think! Mackenzie has had ongoing physio each month as well as at home every day to keep the hand and muscles lose so if the nerves recover she can use the hand as how she is meant to. We see two different physiotherapists and the possibility of exploratory surgery to see if these nerves are torn or stretched is still there. with the ongoing physio Mackenzie has shown unbelievable improvement and now at 18 weeks tries her hardest to hold onto objects she still has a very long road to go, each millimetre takes one day to repair so you can imagine how much has been stretched or torn, We include physio into her daily life, finding new ways for stretch the hand out. Mackenzie appears to be one of the “lucky” ones who suffer this injury as upon my research vie come across many worse cases that break my hearts. She continues to surprise us each day, only this week, 6 and a half months, pushing up onto all fours with both wrists in a normal position which we had been told she may never do, she then tried to crawl. This brought me to tears. Mackenzie’s right arm and hand will be smaller than the left as well it will be slightly shorter, to us she is perfect! I urge ALL expecting mums to ask about their risk factor for their birth. This is a serious injury that affects more children than it needs to and needs to be made more aware of.

Thanks for taking the time to read our story about Mackenzie and we hope this will encourage your team to publish this and help bring make this birthing injury more known to all expecting mothers.

Well I’ve got 2 kids a 4 year old boy and a 20 month old daughter and they were both vbac. Both births of my kids weren’t exactly great but they could of been worse and in the end I ended up with healthy babies.

With my son he decided to come a month early cause he went to the toilet inside which upset him so he wanted out but luckily for me and him I’m a pretty small person so his head was already down low so it didn’t go in his month cause he could have chocked. But as for the actually birthing part it was ok he was born within an hour with no drugs or tears. Just after I had some problems with bleeding and the nurse push out a huge blood clot it was actually bigger than my son who weight 2.6 kg. and since he was so tiny he was having problem feeding but even after all that the hospital asked me to leave after 3 days but the midwife who came to house the next day was shocked they released me, so I was admitted back to hospital and cause my son had lost so much weight he was down to 2.1kg I spent 2 weeks in the special cares unit the ladies there were great very supportive ect.

The birth of my daughter was a lot different, I had been in prelabour for about a week and when I got to the hospital they were worried she’d be too tried for the birth so the did a sweep but the midwife how did the sweep didn’t read my file and it was staff change once the new midwife came in read my file released about the bad bleed from last time so decided just incase I needed blood or meds I needed a drip thing put in but noone could get one in and they tryed many times so they had to call in a special dr with an ultra sound to find a vein so while they were doing that I was being told not to push but the sweep they did had put me in full on labour so as hard as I tryed not to push she was coming regardless so while I was birthing her I had 2 dr ultra sound machine 3 midwifed holding me down my family wasn’t aloud in my partner was there but cause there was so many people he could get to me. By the end and just as her head was crowning they found a vein mind u I counted later from my neck to my feet both sides of my body I had over 30 stab holes and I didn’t end up bleeding g at all, but the dr that did it came up and said how sorry he was which was a really decent thing to do. She was also born drug free no tears and with in a hour and a half and she weight 2.8kg and healthy which at the end of the day is all that counts