Lou finds herself in a tight spot and wonders why the basics, such as adequate baby change facilities, are not offered at all shopping centres. 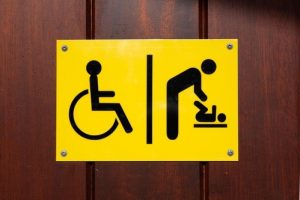 The other day my toddler needed to be changed when we were at the shopping centre. Off we raced to the toilet as if he were a human grenade set to explode. When we got to the bathrooms we saw:

You know what I’m talking about, don’t you? You go into the disabled toilets and find that there’s one of those ancient pull down contraptions where you have to lay your child, strap them in and hope like hell the whole thing doesn’t collapse off the wall. Hardly enough room to swing a cat, let alone deal with a nappy explosion. Nowhere to put your stuff down and nowhere to put the pram.

We made the best of a bad situation and, during the cleanup process, I could hear an angry voice raising in volume outside of the door. I got my son down from the change table, we both washed our hands and talked about how exciting being clean is and then went to leave.

At this moment, out path was blocked by a furious woman being pushed by her husband in a centre-supplied wheelchair. It quickly became obvious just who was the owner of the raised, angry voice and just what the problem was.

“Well, no one looks disabled in here, do they?”

My heart sank as I realised that, yes, I was about to be forced into a public confrontation in front of my child. I was also being blocked into the toilets by a woman and her sheepish-looking husband so couldn’t just walk away.

“This is a parent’s room as well.” I answered clearly and as calmly as I could. I went to walk by them with my son but it wasn’t enough, apparently.

“Well, you don’t look disabled, do you!”

Let’s put aside for a minute that not everyone with disabilities ‘looks’ disabled and get to the core of what was going on here. The fact that shopping centres and public places think that it’s ok to combine disabled facilities with parent or changing facilities is insulting to everyone involved. I’m not excusing her rudeness or her lack of willingness to acknowledge the sign that showed it was a shared facility, but we should not have been put in that situation to begin with.

We managed to skirt around the woman and her husband and head on our way. My son hadn’t even noticed that there was tension but I had that hangover of adrenalin that you often get after a conflict. As we walked away I could hear her caterwauling against me to her husband saying that it was her right to be using this toilet and that I shouldn’t have been in there.

I’m inclined to agree with her. I really shouldn’t have. But I had no choice. Where else should I have changed my child’s nappy?

Centre management, councils and any other groups in charge of public places need to ensure that there are adequate facilities for people of differing abilities, as well as for parents. One space that’s shared is not appropriate.

Asking a person in a wheelchair who has a carer with them to delay their toileting while a parent struggles to dress a child is not respectful. When these two groups clash, they are angry with each other but ultimately directing their frustration at the wrong people.

Instead of raised voices in the corridor outside of the toilets we should have taken our argument to centre management and asked why the two most vulnerable groups had to share the same tiny space. We should have joined together in solidarity and demanded more respectful treatment for the most basic of human functions.

While I was able to shake off the confrontation and move away, this woman remained angry and bristled that I was in a space she thought she, and only she, had a right to. I’m the bad guy in her mind instead of a system that says she is less deserving of respectful treatment and space.

If my son needs to be changed next time we are the shopping centre I might walk past those toilets and find somewhere else to do it. Maybe I’ll try the centre management office instead. I’m sure they have a lot more space.

For a related topic, take a look at our readers comments on Dad’s a public toilets. 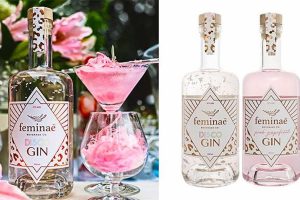 Get in My Glass Fairy Floss Flavoured Disco Gin