Old before our time 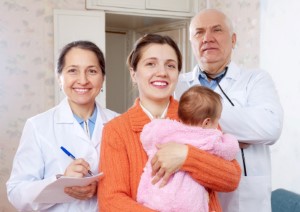 I have recently discovered that the vast majority of my mummy friends and I are part of an oddly named club; one that suggests blue-rinsed hair-dos, zimmerframes, and dentures placed in glasses of water next to our beds at night…

We are Geriatric Mothers, all at the grand old age of 35+!

For reasons as personal and individual as each of us, most of my friends and I didn’t find ourselves having our first child until we were well north of 35. Some of us were studying well into our late 20s, some of us were travelling, some of us were building our careers, and some of us were doing all three or some combination thereof. Whatever the reason, kiddies were not on the agenda.

In my case, I didn’t meet my husband until I was 33. Constant questions from the well-intentioned such as, ‘when are you going to get married and have a baby,’ were the bane of my existence. ‘Ummm…. when I meet someone special I will!’ was all I could reply.

I met my husband in my early 30s, became engaged and was married in my mid-30s. I had my first child (affectionately known as the Peanut) at 37. Now I am 38, nearly 39, and questions about my marital status have been replaced with well meaning, ‘so when are you going to have another baby?’ questions.

‘I don’t know,’ is the answer, but I wish I had more time to think about it.

Don’t get me wrong, I have friends who have had children in their 40s. Indeed, I have friends who have had their first child in their 40s. But (and I should say here that I am not a doctor), risk factors and energy levels don’t seem to improve as we get older. If we are going to have another child, I feel that we should do it sooner rather than later.

Personally, I am not too concerned if Peanut is an only child. I was too, and I had a great childhood.  But, by the same token, my husband has a number of siblings and he loves the closeness and camaraderie that he shares with them.

So I am left wondering whether or not to add to our brood. I am not alone – many of my other mummy friends are wondering just the same thing and, like me, are finding the fact that we are in our late 30s and early 40s an unwelcome stressor.  In fact, it is something we talk about a lot – “I think I would like another, but I would also like several years before I make my mind up” . Sadly, we all feel that we probably don’t have the luxury of several years.

I would love to hear from other ‘geriatric’ mummies and hear how they made their mind up. Was it a function of age or did you just know that you really wanted another one straight away. Was the second one much harder? Did you feel the additional few years on your energy levels?

Ambre is a first time mum to a beautiful little boy, an economist and a working mother. I am trying to navigate my way through this strange new world one day at a time. To see all of Ambre’s articles and recipes, click here.