When my wife came to me and said she wanted to start using cloth nappies, I was really surprised. She approached me with a pitch, photos of nappies she assumed I’d like and it nearly felt like a presentation with all her facts on the cost and environmental benefits of using cloth. I should point out straight away, the fact she felt I needed a presentation already had me incredibly nervous. Pitching cloth nappies can be a hard sell though, they have more of an upfront cost, they require more work (washing) and they need to be changed more frequently than disposables.

Even when I was initially hesitant after my wife’s pitch, she wasn’t deterred. She really adopted the cloth nappy lifestyle and it seems there is a massive, thriving community of modern cloth nappy enthusiasts. In fact, when my wife’s full time work proved to be difficult for our lifestyle, she opened her own online modern cloth nappy store, started contributing to the MCN community and really getting involved. She believed in the product enough that she wanted to invest our time and money into promoting and working with cloth nappies everyday.

I guess in the end, I didn’t need much more convincing than her enthusiasm and even talking to other fathers, it seems that it’s the wives who really drive the conversation around cloth nappies and be the ones excited about using them. The reactions from men always seem to be the same: disinterested. It’s a change we don’t need and it’s probably no surprise that men don’t get drawn in by the pretty patterns, ruffles and the ‘glamour’ of cloth nappies.

The best case my wife put forward was that cloth nappies are considerably cheaper, they’re  made from natural fibers which means they break down (unlike disposable nappies), and they breathe. It made enough sense that cloth nappies were worth testing (and soon after, adopting). 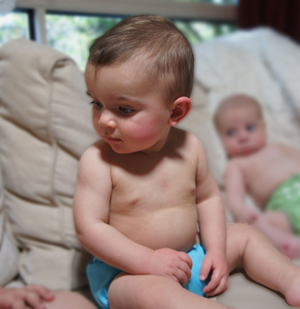 I guess men don’t get ‘pretties’. I still don’t get pretties, they’re more expensive, require more care and attention and don’t work any better. They do seem to be a major talking point in the change rooms and a big point of difference, but I don’t think you could ever sell cloth nappies to a man based on ‘pretties’.

I’m really glad my wife introduced cloth nappies. I don’t really get the pretties but we’ve started seeing benefits we never thought about when we started using cloth. Our son knows when he’s wet, he seems more comfortable in the natural fibers and we’ve barely experienced any rashes. For me personally, I didn’t really think the benefits were going to outweigh the doubts and extra work, but I can say the best way to convince me was to use them and see the impact they’ve had on our son.  Now that I’ve gone to the ‘cloth’ side, I wouldn’t go back.