Relationship Survivor: Who has this week’s immunity? 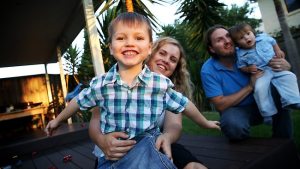 I have tried to write this blog a thousand times.  I have sat at my computer and wondered in what direction this should go.  I know the key points that I want to say, but it is the way in which they should be delivered, the tone of these words that I have had trouble with.  And then whilst looking up other words for vaccine it hit me.

I try to add as much humour as I can, even to the most sombre stories that I write.  Delivering a eulogy to my mother had to include at least one joke; she would not have wanted it any other way.  But as I planned this particular article I found myself at times confronted by a situation that had often knocked me off my feet, so I will try to add a bit of frivolity, but not too much.  But that’s enough of my preamble; it is time to dig my feet in and get to it.

The differing opinions of my wife and I about one of the most contentious issues going around the printed, online and radio media with the continued debate throughout social media has been well documented.  Long before the News Limited published news story about the decline in parents getting their children vaccinated in which my wife and I were mentioned (‘Einstein parents’ say no to kids’ vaccination)  the debate in our household has been played out on parenting forums and within our own social circles with friends and family.

The main reason why I wanted to write this article is to answer the questions that I constantly get asked by those who are pro-vaccination.  These questions are not verbatim to how they are asked, but they are presented in a way that encompasses the question as a whole and combines all the alternative ways in which they are asked;

“If you are pro-vaccination yourself, why haven’t you (put your foot down) and forced your wife to get the kids vaccinated?”

I have been asked this by family and friends and recently by two journalists.  This is the answer that I have been giving, especially of recent times.  As an active member of a few parenting forums, one in particular, I have noticed that there is an increase in separations and divorces of parents with young children.

I find this sad.  This is not a judgement.  I am a former divorcee having been previously married, but luckily we didn’t have to deal with a marriage breakdown and the raising (or custody issues) of children.  So, as a member of the divorcee “clique” I have every right to judge if I wanted to.  That’s not what I am doing or suggesting here; but it really has to be said that this upsets me that so many families are being torn apart when I am sure it doesn’t have to be like this.

Our marriage isn’t perfect.  We disagree on many things.  Many minor things I should add.  But when it comes to the most important thing in OUR relationship (that is between me and her exclusively), how to raise OUR children, and what we think is best for them is something that we agree on.  Did you read that right?  That is, we might not agree on the way things should be done, or how we want them to be done, but we agree that what is best for our children is something that we need to always focus on.

So do all parents I hear you say.  I disagree with that.  You see, I have seen it too many times.  I have read it too many times; parents putting themselves and their wishes above the rights of their children.  There are plenty of parents out there who want to still go out and party.  That is both mothers and fathers.  Often times in the parenting forums you will see that it is mostly mothers claiming that their partners are the ones who are doing this.  And in a forum where women dominate the conversation, yes, that IS the case.  But in reality, there are plenty of mothers who don’t want their social life to change just because they have kids, and often times, the impact of this is detrimental to the upbringing of the children.

So whilst we might not agree on the intricate details, at the very least, we know that we will do our best to not let our boat sink.  Do we stick to the coastline or sail out to calmer waters?  Do we pull up the oars and let down the sails?  Is it full steam ahead or a gentle cruise?  All of these are viable choices.  Just don’t let the vessel sink. (End passage of boating metaphors).

As one who aligns themselves with the scientific sceptics and observes empirical evidence, I don’t agree wholeheartedly with those things that she fears, those nine myths about vaccinations that the anti-vaccination lobby would have you believe.  BUT SHE DOES.

You should have seen the look on her face last week when on the news they announced that our State Government has almost pushed through the bill to ban unvaccinated children from attending preschool.  I was taken aback when she burst into tears and whilst trying to pull herself together she screamed out “is the government trying to kill our kids?”

Do I think she is crazy? No. Delusional? No.

“Do you feel like a bad parent not vaccinating your child?”

With the constant barrage in the media, with not a day going past where News Limited’s online and printed newspapers such as www.news.com.au and The Daily Telegraph (New South Wales’s daily state based broadsheet) of which I subscribe to and follow on social media, and with other media websites being just as “in-your-face” about the issue, it is hard to escape the vaccination/anti-vaccination debate.

And on many occasions I wish this was an issue that I could look at and go “I could add my two cents worth, but I’m just saying the exact thing as the masses, so what’s the point?”  But the reality is, because of the situation that I am in, this is something that I take notice of.  It is an issue that is more than at the back of my mind, it is right up there, right in the thick of it.  It is pushing the song lyrics out of my ears when I listen to music.  It is talking over the actors when I am watching television.  It is writing itself into each and every line a read in books, magazines and on the internet.  I am living this right here, right now.

And everywhere I look I see people writing things like “these parents need to have their kids taken from them,” and “these parents don’t care about their kids” plus many other things that you would expect to read as comments in child abuse cases.  Oh, and I almost forgot that “how can the government let these parents get away with child abuse?”

When our eldest was much younger and he had a reaction to egg whilst we were having lunch at the shops one day, we rushed him to the emergency department at our local hospital where they had to give him steroids to overcome his anaphylactic reaction.  When he split his lip open on New Year’s Eve when he was two years old, again we rushed him to the same emergency department only to have to take him to another public hospital because “being New Year’s Eve and all, it is going to get busy here…”

He ended up needing stiches in his lip.  He was injected with anaesthetic and of course the needle with the stitches was threaded through his skin.  My wife lay on the operating bed holding him tightly, crying and screaming out.  She repeatedly said “I’m so sorry, I’m so sorry” to him like it was our fault that he had an accident.  Kids are kids.  They do this sort of thing.

And where was I?  At first I was standing back watching as I was told I was in the way.  There were already three nurses plus my wife holding him still whilst the doctor stitched his lip back up (and may I add, thanks to this brilliant doctor, 36 months later and there’s no noticeable scar there). So I stood back and watched this until I started feeling light on my feet, and whilst I’m not proud of this fact, I fainted into the chair beside his bed.  I have never been good with needles having fainted twice before whilst having injections or blood samples taken from me.  As a result, when the needles come out, I am man enough to ask to lay down (the doctors and nurses prefer big bulky guys like me to do this), so if this is you, don’t be embarrassed to ask to lay down.

And that’s not why I am against my sons getting vaccinated.  No way.  I have had injections and vaccines myself.  I had a tetanus shot myself when almost slicing my finger off a few years back.  I am not against vaccines.  Not one bit.

And that’s how I can live with the fact that I am NOT a bad parent.  I am not anti-vaccination.  I am not out there suggesting that we stop vaccinating our children.  Personally, outside of the relationship that I have with my wife I support the pro-vaccination stance.  I agree with those petitions that are going around.

And I want YOU to vaccinate YOUR child so that my child doesn’t get infected by your child.  Is that hypocritical of me?  Well, no.  If you saw how much money we spend on all of the vitamins and supplements that we give our boys you might freak out.  I guess what I am saying here is that (if my wife is correct) we are being very pro-active in boosting their immunities.  And just as the anti-vaccination debaters always bring up, the issue that “vaccinated children can still get infected because it doesn’t work for every child, and the right strain of immunity might not be given” I am sure that not every child will benefit 100% from the immune boosters we give our boys.

But again, we are being pro-active.  As I said in the News Limited interview “I don’t know I totally agree with her but if Gen wasn’t going into this armed with all the information that she obviously has, then I would be more against her,” he said.  And as my wife said in the same interview (our) boys “line up every day for their Echinacea and fish oil” plus we give them vital greens and other winter-time supplements to promote a healthy immune system.

Do you and your partner disagree on any important parenting decisions? How did you resolve it?

Darrell Milton is a father, husband, son, brother, cousin and holds many ’in-law’ titles. He is also a song writer, poet, speech writer, musician, writer of short stories and a social media junkie. With an opinion on everything you would never hear the phrase ’long time listener, first time caller’ from him. You can follow him on Twitter and Facebook, or visit his blog.