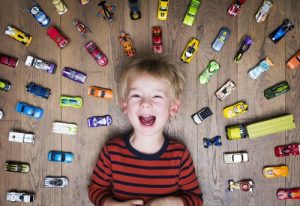 Driving with a toddler from A to B? Take Lou’s tips for a stress-free journey.

In early January my family and I moved from Melbourne to Brisbane. We shipped off all of our stuff (basically a freight container of stained t-shirts and furniture riddled with bite marks) and spent four days in the car enjoying the inland scenic route to Queensland. Some parts of it were idyllic but most of it, if I’m honest, was weird little pubs, a shitload of trees and cows’ bums pressed up against fences. My son can say “anus” really clearly as a result of this adventure. 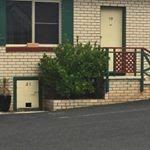 Just the keys for 21, thanks mate! Love the facilities – so roomy!

We decided to stretch the journey out over a couple of days to compensate for the kid’s fairly crap ability to sleep in the car and the fact that mummy likes a nice evening red. Suffice to say our marriage survived and didn’t descend into a Bourke and Wills situation (bet they didn’t have to put up with all those anuses) mainly because I’d booked ahead and found us some really nice hotels to crash in.

Putting this child into a car seat and strapping him in with the promise of a super fun time at the end of the ride rarely works. What I’ve developed is a complex series of tricks and ruses designed to make sure I can get from A to B without having a stress-induced aneurysm.

Without further ado, here is my advice (as a parenting commentator with no actual qualification who is in no position to give anyone advice ever) for driving with kids.

If the repetitive nature of your children’s music is crushing your will to live you can fuck The Wiggles off for some death metal instead. Reggae works well, too. Just crank it up to cover the whining and all of a sudden you’re in your early twenties again.

Think of it as a way to broaden your child’s musical and historical education. They could go their whole childhood without hearing Phil Collins’ back catalogue – do you want to be responsible for a travesty of that magnitude? I didn’t think so. Just say the word. Sussudio.

Some people are real purists (read: uptight assholes) (I’m sorry there’s so much anus and asshole talk in this article, I’ll be bringing that fixation up with my therapist) about letting kids eat in the car. They’re all about restraint and neatness and waiting. New car smells. Strong opinions about ants and rodents. Adverse to squashed muffins.

My car is so full of half-eaten boxes of sultanas, miscellaneous food smears and banana peels that I am basically a compost bin on wheels. Lou the Portable Worm Farm. Chucking food at my kid if he starts complaining while I’m driving means I have the possibility of driving for at least 500 metres before hearing some bullshit like, “Oh, I don’t like this. I don’t like peanut butter anymore”.

The stickier the better, I say. Full mouths mean less chance of screamed opinions like, “No, go this way!” or “Mummy’s bum smells”. Chow down, Chuckie.

Here’s where I’ll get people disagreeing with me and that’s ok. Really. I’m open to criticism. I know no part of my personality or demeanour would indicate that being possible but it is true. I’m cool if you raise your kid differently to me. But let me drop this truth bomb right in your face. Near your face. Around your face?

I’ve got an iPad that’s in a shatter-proof case that I let my kid play with sometimes.

It’s true. He can play a few little ABC KIDS games like Humpty Dumpty’s Birthday or puzzles or art. The Humpty Dumpty one is pretty cute, actually. It’s Humpty’s birthday and you have to help him with different preparations during the day, like choosing an outfit and decorating a cake. The cake is cute but Humpty has a seriously shit wardrobe. A suit for a kid’s birthday party? Like, get the feel for the room, HD. You’re going to look like a complete dickhead in that suit.

Anyway. The iPad also links to ABC KIDS so a few episodes of each show are on there as well in case of emergencies. I like using the iPad because a lot of other activities get lost during a car ride (getting a 2-year-old to colour while you drive is like trying to get a cat to type a dissertation) and it can engage him enough so I’m not distracted while I’m driving.

Yes, I know that when you were a kid your mum just sat you on the back seat and listened to you cry while she smoked fifty cigarettes and did drugs and called you fat and you survived. Good for you. I think things are different now. There’s a lot more traffic on the road which means a lot more bad drivers which means I’m concentrating my little arse off trying to protect my precious cargo (the kid, not the Savvy B). Technology that helps me out is available to me so I’m going to use it to make my life easier.

Plus, if we’ve got the iPad and my husband’s driving I can decorate Humpty’s cake with one million marshmallows and that fills me with a greater joy than I’d like to admit.

Care to share – have you got any tips of your own to make the living hell that is transporting a screaming child across town any easier? Comment about driving with a toddler and let me know! 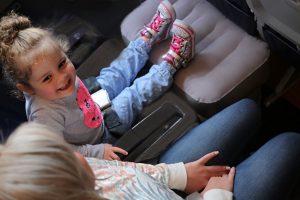