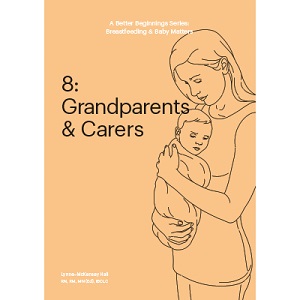 Are grandparents between a rock and a hard place when a baby arrives?

Grandparents, in general, are very excited about a new baby in their family. Some approach the new arrival with a degree of trepidation, especially if they are the ‘in-law’ or ‘step’ grandparents as they wait to be included or invited into the new family unit. Others will bowl straight in. For a new mother, sometimes it’s the latter who can be problematic!

Carers who are paid to help a mother often have a clearer understanding of their place in the family,  though I strongly believe their role is to nurture and support a new mother’s maternal instincts rather than dictating schedules and routines.

So what can grandparents do to be helpful and supportive?

The “happiest” grandparents I have been involved with are those who have educated themselves with the latest information about breastfeeding and early parenting.  These grandparents are getting involved by doing such things as participating in a First Aid course specific to babies and young children, reading the latest guidelines about SIDS, updating their immunisations and being supportive of the breastfeeding principles and guidelines the new mother has been shown after the birth of the baby.

Thanks to scientific research, much has changed with what we know about the anatomy and physiology of the breast as well as a baby’s nutritional and neurological needs. Much of this information will be very different to what grandmothers learned when they had their babies. Grandparents and Carers has this new information for those grandparents and carers who want to be involved in a loving but really useful way.

There are so many practical ways to help. A meal will never go astray, nor should several meals ready for the freezer be refused (mad if it is!). While some new mothers feel uncomfortable about having an in-law, in particular, involved in housework, the offer of doing a load of washing or a basket of ironing shouldn’t be knocked back. And of course it’s always helpful to cuddle the baby when a new mother wants some time for herself.

If any or all of this is not possible for whatever reason and money is no object, there are many possibilities. A consultation with an IBCLC is a wonderful present, for example. This gift works even better when the grandparent hears the same information as the mother and can offer prolonged support long after the IBCLC has gone. Paying for a cleaner for a couple of weeks, a gourmet dinner service for period of time, a washing and ironing service or a mother’s helper are always helpful gifts, which ever one is given.

Whatever the circumstance, grandparents and carers have an invaluable part to play in supporting a new mother settle into her role.

By Lynne-McKensey Hall IBCLC, RN, RM, MN (Ed).  ‘Grandparents and Carers’ is available to purchase as part of the new Breastfeeding and Baby Matters book series for $14.95 + postage and handling at www.betterbeginnings.com.au

Lynne-McKensey Hall has over thirty years’ experience in nursing, midwifery, nurse education and lactation management. She now works as an IBCLC in her private practice Better Beginnings in Sydney, Australia. Lynne has just released Breastfeeding & Baby Matters, a series of eight booklets available from Better Beginnings. She is also available for phone 0419 245 966 and Skype consultations. To see all of Lynne’s articles, click here.