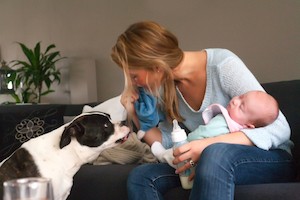 Does anybody have any advice on introducing dog to baby? We have a lovely natured 18month old staffy but he’s still very playful. He’s great with bigger children but I’m apprehensive about introducing him to the baby

Read about parents tips with managing a dog and a crawling baby here.

Let dog sniff at baby when they are in the pram

How did you go about introducing your dog to your newborn baby? Share Below