Going with the flow – tips for pregnancy and childbirth

For Lou, going with the flow meant shrugging off mean comments about her size during pregnancy and appreciating that a natural birth isn’t always possible. 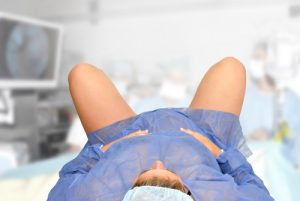 If you’re currently pregnant, thinking about being pregnant, wanting to be pregnant or if you are in the possession of any kind of female body parts you’ve probably run into some opinions on childbirth. I wanted a natural birth but I also just wanted what was best for everyone concerned. Fortunately, I was happy to go with the flow.

We had a scare, early on, where test results came back looking very shifty and we thought that the baby wouldn’t survive the pregnancy. Once we were past the obstetrician really could have said anything and it wouldn’t have dulled my vibe.

“Your baby has a huge head” Healthy? Don’t care. “Your baby is wearing a small suit in the womb” Well-made and water-proof? Whatever. “Your baby looks like Donald Trump” Offensive and horrifying, but still don’t care. I was growing a healthy little potato inside me who could do whatever the hell he wanted just as long as he was ok, I wasn’t going to worry about a thing.

Yep, going with the flow baby!

My obstetrician advised through the pregnancy that it looked like the baby was going to be big. It quickly became apparent that big meant BIG. Of course, I had the usual helpful comments from colleagues that really make this time in a woman’s life extra special. One particularly poisonous individual told me I was enormous and pointedly asked if I was having twins with a mean smirk and a raised eyebrow, projecting her own body issues onto anyone in her immediate vicinity. She later seemed confused as to why I’d taken offense and suggested I was perhaps too sensitive.

A few other people tried to cutely call me things like Chubby and Tubsy.

I remember wearing a glittery singlet one day to try and trick myself into cheering up when my husband, trying very hard to be cheerful and festive as we approached the end of the year, sweetly told me that I looked like a Christmas bauble. Babe, I know you’re reading this – still pretty shitty about that one! Ho ho ho, jerkface!

My increasingly rounded state, rising blood pressure and general state of extreme puffiness had my doctor on high-alert. I was now on weekly appointments and she talked about a few things we needed to look out for that might complicate delivery. I have to be honest with you, I wasn’t really listening. My brain does a very unhelpful thing in times of stress where it packs up and leaves the building so my memory is clouded with thoughts of pizza and trying to remember the name of the dog from Neighbours.

We got to about week 35. We’d gone out for lunch beforehand – the Christmas Bauble Cold War long over – and headed in very casually to my weekly appointment in the city. The doctor was concerned straight away – measuring, taking samples of blood and urine (that sounds weird, I peed in a cup, she didn’t take the wee from inside me with a special wee vacuum) and checking my blood pressure again and again. I went on a little monitoring machine as well.

Then came the doctor’s verdict, “you’re going to stay here and have your baby in the morning.”

Yep, going with the flow baby!

Louise Lavery is a writer, a renegade, a mother and a ridiculous human. She's an online editor, print editor, writer for small business, young adult novelist, social media manager, academic and completely terrified of balloons. It just always feels like they're about to pop and give you a little fright, you know? You can find her all over the internet just doing her thing, or at her website here and at Families Magazine.

Your big day: Preparing for labour