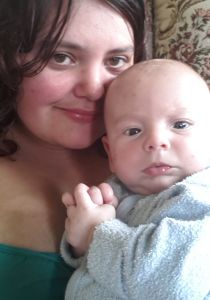 While I was pregnant with my baby boy last year I knew I wanted to breastfeed him for at least 12 months. But having had so much trouble breastfeeding my first baby 12 years ago I knew it wasn’t easy. Before I was due I made sure I had everything I might need to express and bottle feed him if needed.

I really wanted to breastfeed him, but I could only breastfeed my daughter for the first three days, and I express breast fed her for 3 weeks, so I wasn’t going to be totally devastated if I couldn’t.

First 3 days were perfect, and then…

The first time he was put on my chest after birth was so amazing. Since I’d had no drugs at all during labour he was so alert (a difference from my daughter) and he latched onto my breast within the first hour. The first three days we breastfed perfectly. But when my milk came in I got engorged and had a lot of fluid and he couldn’t latch on. We found nipple shields, best invention ever!

He was only a week old when I had more problems: my milk seemed to be lacking. You might think it was because of the nipple shields not stimulating the breasts enough to make enough milk; for some that’s true, but for me it was infection. When I started having a fever I ended up in hospital at eight days pp as it turned out I had an infection in my uterus. I’d had a natural birth so they weren’t sure why, but I was in hospital for two nights on IV antibiotics and only just made it home for Christmas.

After that I worked to build up my milk again and was exclusively breastfeeding him, when at four weeks pp I got mastitis. It started as a lump, then got red and sore so I went to the doctor right away. Antibiotics, see ya later!

The mastitis wouldn’t clear up

I knew that you have to get rid of the lump. I tried everything! I called the breastfeeding association and got their advice. I tried heat, massage, expressing in the shower, bath, with vibration, on all fours above my baby so his chin was on the lump; nothing moved it. But it wasn’t sore or red anymore.

When the lump was still there a couple of weeks later I went back to the doctor. More antibiotics. I had started to feel awful a lot, but I didn’t have a fever. After the second lot of antibiotics my doctor told me if I wasn’t better in a few days to go to the hospital. So I did. More antibiotics, go see your doctor.

Back at my doctor, he said he could use a needle to suck out the milk so the duct could fix itself. He tried in his office, with no anesthetic, and after three tries he gave me a referral to get an ultrasound guided aspiration (needle with doctor looking on an ultrasound).

It was an abscess

They didn’t find milk. They told me it had turned into an abscess. The doctor drained a little but couldn’t get much out. He sent a sample off to be tested and gave me the “right” kind of antibiotics.

Despite all of this I was exclusively breastfeeding my son and I was so proud of myself. That is, until I took him to be weighed and he had only put on 100g in three weeks. I looked in his book and he’d only put on 400g in five weeks. So I started leaving him on the breast longer and topping up with formula when needed.

After my second ultrasound guided aspiration I finally saw a surgeon. I was so excited! Finally I was going to be fixed. I was devastated when he looked at me and said they were not going to do anything. Since I’d had it aspirated the week before it was a bit smaller and he thought I was complaining about scar tissue, even after I told him that it was affecting my milk supply and my baby hadn’t put on weight for five weeks. He told me if I stopped breastfeeding it would go away.

Three days later it was bigger than it had ever been.

I was in pain pretty much constantly and my milk was not enough for him. I gave up breastfeeding. I was giving him more formula than my milk and he had started refusing the breast. It was so hard and the surgeon had said if I stopped it might get better. It didn’t, it got worse, but my doctor had given up on trying to fix it. I saw him for the depression I had started experiencing and he asked me how my breast was. I said that I’m always in pain and he just said “okay”. Then when Devlin was weighed and measured for his four month needles he asked, “Did you know your baby hasn’t grown or put on weight properly? He’s dropped two percentiles in both weight and height.” So I changed doctors.

New doctor and finally an improvement…

The first appointment with the new doctor I had a referral to a different hospital where I was admitted and saw a surgeon who took me on himself, aspirating and flushing the abscess. I was worried it wouldn’t work because the last two aspirations hadn’t, but it did! Its been a month now and I just have a small amount of thickness under the skin.

And after all that I still had a little milk. So my new doctor is helping me relactate. My baby wont take the breast anymore, but I can express bottle feed him. Its not exactly what I wanted, but I’m glad I can still give him some breast milk.